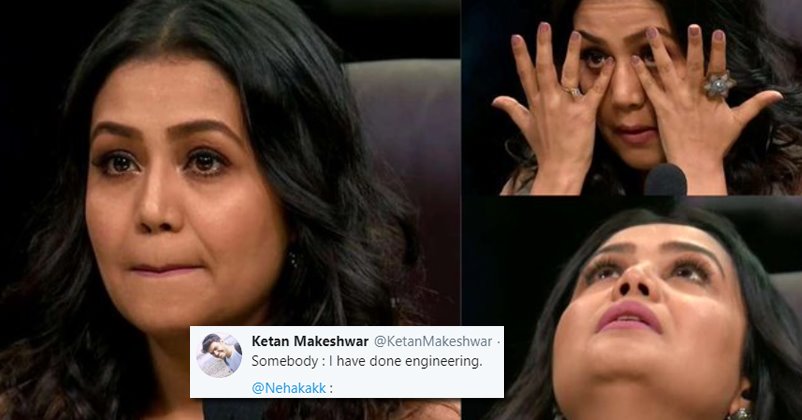 Coca Cola Tu singer Neha Kakkar is one of the most popular female playback singers of the Indian music industry. Neha has been always in the news, whether it is for her songs, dresses, love life or for judging reality shows.

Neha Kakkar was the judge of Indian Idol season 10 along with Vishal Dadlani and Anu Malik. If you watched season 10 then you would know Neha Kakkar used to get very emotional by the stories of the contestant or anything. Well, the London Thumakda singer is all set to return to Indian Television as the judge of Indian Idol season 11 but few people are not happy by the fact.

As we all know reality shows are built of great editing, sympathy, emotional dilemma and of course talent. Desi Twitter is creating memes out of Neha’s tears and even made the singer trend on Twitter for over being over emotional.

Check out the funniest memes:

Contestant :- I feel hungry after every 3-4 hours

Contestant – i have just 5 fingers in my one hand…

#NehaKakkar
Contestant : Ma'am, There is a Crack between my Ass!

Contestant : I have just one father..

I have only one pair kidney

Contestant : I get 2G speed in my area.

Contestant- My heart have to work 24*7
Neha Kakkar pic.twitter.com/AjTn1Fa2Cz

Contestant: i have no money to buy #IPhone11
Neha Kakkar : pic.twitter.com/89FKgZbRcx

Contestant : It does not smell when I fart. #NehaKakkar: pic.twitter.com/k7Gj1JfRR4

South Mumbai Girl – My parents did not give me money to buy my 142th pair of designer footwear.

Contestant: I don't have any emotional story.