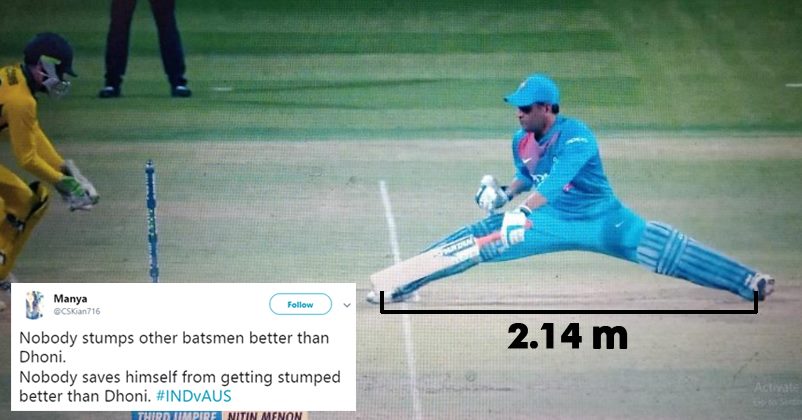 Dhoni is one of the most shining stars of the Indian cricket team. No matter how many questions you arise on him, he will prove you wrong with his amazing fitness and presence of mind.

Recently during the 2nd T20I against Australia at Chinnaswamy Stadium, Dhoni showed something which was nothing short of mind-boggling. While trying to respond to delivery by Adam Zampa in the 11th over of the match, Dhoni went out of the crease. To save himself from getting stumped he immediately returned and showed a full split stretch of 2.14 meters. Isn’t that wow?

Even BCCI was blown away with Dhoni’s flexibility and shared it on Twitter. BCCI wrote-

How’s that for a stretch from @msdhoni 😮

How's that for a stretch from @msdhoni 😮😮 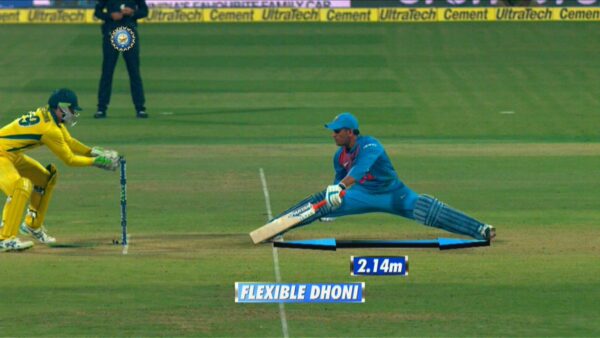 Vintage Dhoni Things..
Only MS can do this 😍😎
Fitness Level of Mahi 💪
Plz Don't Try At Home 😅 https://t.co/VRLwjdf8In

Dhoni giving stress to 'critics' with that stretch! 😍 #INDvAUS

I like dhoni…..he is old lion of cricket forest …..so not questions again on dhoni

The mahi way of not getting stumped @msdhoni https://t.co/Ch3HYLIIxM

Nobody stumps other batsmen better than Dhoni.

Nobody saves himself from getting stumped better than Dhoni. #INDvAUS

Isn’t that amazing? We hope to see many more amazing innings from Dhoni in future.

Continue Reading
You may also like...
Related Topics:cricket, MS Dhoni

Video Of Virat Kohli Celebrating His Security Personnel’s Birthday Goes Viral. Fans Are Loving It.
Great News For Cricket Fans, The Game Will Be Making A Comeback At 2022 Asian Games.