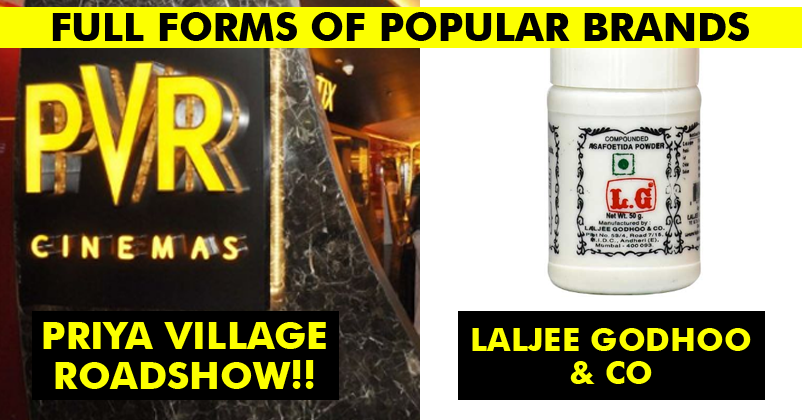 Our day starts with picking up a brand and ends with an another brand. Here the brand may vary from – car, speakers, movie theater, bank, eatery etc. Words like JBL speakers, BMW cars, PVR cinemas etc have become quite common in our lives. But 90% of us still don’t know the full forms of these world famous brands. What is intriguing is, even though we use it daily we don’t take our time to know about these brands. For this very reason, we decided to bring you the full forms of some popular brands which you guys have never heard of. (I’m pretty sure most of you don’t know these full forms.)

Here’s presenting you 25 Popular brands and their unknown full forms. BMW is the acronym of Bavarian Motor Works (English) and  Bayerische Motoren Werke AG (Germany). It was founded on 7th March 1916. BMW is known for premium cars manufacturing. British Physical Laboratories was founded in 1963. It is known for making health care equipment and electronics devices. The Birmingham Small Arms Company Limited was founded in 1861. Headquarters are located in Birmingham. Delhi Land & Finance was founded by Ch. Raghvendra Singh in 1946. It is the largest commercial estate developers based in India. Tata Docomo is a subsidiary of NTT Docomo of Japan. It was founded on August 14th, 1991. FIAT is the largest manufacturer of automobiles in Italy. It was founded on 11th July 1899. It produced 1.4 Million units in 2010. Hindustan Computers Limited was founded on 11th August 1976 by Shiv Nadar. It is a multinational IT company. Shiv Nadar is the present Chairman and CSO of HCL. Housing Development Finance Corporation was founded in 1977 by Hasmukhbhai Parekh. Deepak Parekh is the current Chairman of HDFC. Hindustan Machine Tools is a Public sector undertaking and was founded in 1953. Girish Kumar is the present Chairman and MD of HMT. High Tech Computer Corporation was founded on 15th May 1997. It is famously known for its mobile handsets. International Business Machines Corporation was founded on 16th June 1911. It is a multinational technological company and operates in over 170 countries. Industrial Credit and Investment Corporation of India was founded in 1994. Chanda Kochchar is the present CEO & MD of ICICI. James Bullough Lansing was the founder of JBL. Headquarters are located in California. It is famously known for speakers. The full form of JK is derived from the initials of Kamlapatji and his father Seth Juggilal. It was founded in 1874. LG was formerly known as Lucky-Goldstar. It was founded on 5th January 1947. Mahashian Di Hatti Limited company was founded in 1919. MDH is a global spice provider and also the second largest in the Indian market. New Delhi Television Limited was founded by Prannoy Roy and Radhika Roy in 1988. PVR cinemas is a joint venture of Village Roadshow Limited and Priya Exhibitors Private Limited. It was founded in June 1997. Ajay Bijli is the current Chairman and Managing Director of PVR Cinemas. Vodaphone name is derived from Voice Data and Fone (which meant telephone). It was founded in 1991. Its predecessor was Racal-Millicom. Previously it was known as Western India Palm Refined Oils Limited, recently it has changed to Western India Products Limited. It was founded by Md. Hasham Premji in 1945. Azim Premji is the current Chairman of Wipro. Pass on the information to your friends and dear ones.!!

Paytm’s New Features Are A Great Step Towards Making Modi’s Dream Of Cashless India True
Wow! Paytm Is Offering A Free Movie Ticket To All Users But For That, They Need To..