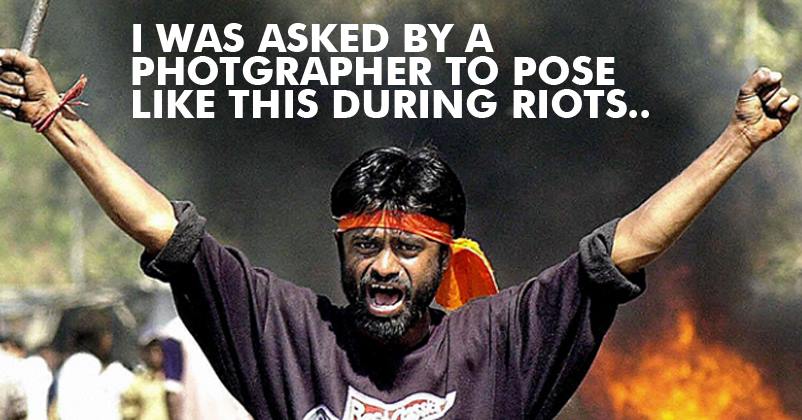 Time is funny and dangerous too. It is the best teacher who helps us introspect ourselves in a much better way. Some people say that ‘IT TAKES TIME FOR PEOPLE TO CHANGE’ while Ashok Parmar aka Ashok Mochi who was once the face of Gujarat Riots completely destroys such an argument. He is now the face of MUSLIM-DALIT Unity. But according to him, being the face of Gujarat Riots was just a ‘coincidence’ and a big misunderstanding. HOW ? Read Further.

According to him, he was never a part of any organization like RSS or Hindu Rashtra. He had no links with them. This is the very same guy who once held an iron rod in one of his hand, while his arms were stretching wide in anger and wore a saffron band on his forehead along with tight fists and shouting out loud with fire blowing off behind him. Now it is very surprising to see the very same who was once the saffron terror face doing such an honest and hard working job. He is now a cobbler by profession who sits on the footpath of the busy road between Shahpur Darwaza and Delhi Darwaza in old Ahmedabad in a temporary shelter along with few boxes that contain boot-polish, big and small needles, buckles, pins, thread, worn-out shoe brushes and other equipment to repair footwear. True, it takes time for people to change. But Ashok Parmar has something to say in regard to this. In his exclusive interview with one of the newspapers, he revealed that the picture of him holding iron rod while he was shouting out loud was clicked by a photojournalist who has asked him to pose in that particular manner. STRANGE ! ! Didn’t know that yellow journalism was back then too.

When asked about why he held the iron rod and went on streets despite knowing the fact that it a ‘BANDH’ on that day, his response was something surprising and interesting too.

He said that the girl he loved was married just few days before the riots and when he came back to work with heavy heart, the riot took place at that particular moment which was around 10 am of the morning. The BANDH affected many lives and especially of daily wage workers like him. This cost him his daily wage and hence he couldn’t afford his meal. He became furious. Angry at his own situation and about the things happening out in streets which were the reactions of Godhra Incident. Hindus started killing Muslims. And since he had a beard back then which almost made him look a Muslim, he had to wear the saffron band on his forehead which apparently made him look like a Hindu and hence that was how he saved himself. Meanwhile the photographer (Sebastian D’Souza from Mumbai Mirror) approached him and asked him to pose like a rioter. In response to that, Ashok picked up the iron rod and the rest is just the history which made him the cover boy for all the newspapers and magazines which is still embarrassing and humiliating for him. That particular photograph landed him in jail for 14 days. However he was acquitted by the lower court because of lack of evidence.

He is now urging the people of India to kindly look into the photograph and observe that he wasn’t standing with anyone. He wasn’t part of the mod. Ashok along with his friends out of which many were Muslims joined the 10-day yatra in Savarkundla before it ended on August 15 in Una, the very same place where seven Dalits were flogged for skinning a dead cow.

“Dalit-Muslim unity is the need of the hour. Both communities are oppressed and poorer. And therefore, they are being targeted on one pretext or the other – the latest one is the terror unleashed on them in the name of cow protection. I believe every citizen of India has a right to live peacefully and have a roof over the head. He or she should have all the freedom to chose profession and decide what eat and wear,” He said in his interviews.

What are your views about it. Write down your opinions in the comment section below ! !

This Russian Girl Puts Her Life At Risk To Click Good Photos! Guys, Please Do Not Try This!
Meet The “Oldest Living Man”! No Sex & Yoga Are Secrets Of His Long Age