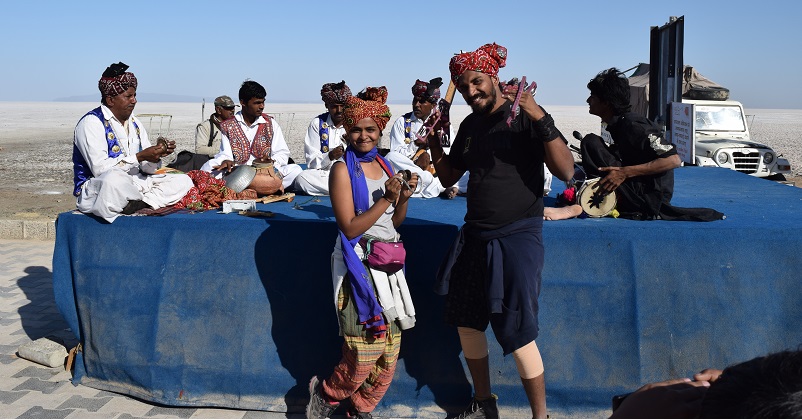 Travelling is a way of life:

The majority of Indians consider travelling as a way of refreshing their senses and getting energized for once again battling out the hustle and bustle of daily lives after returning to the normal routine. However, there are some people in this world for whom travelling is a way of life and they don’t actually plan their holidays or journeys but instead, they just happen.

The wonderful couple who lives to travel:

Let us introduce you to one such couple named Chandana Rao and Sunil Patil who live to travel. While Chandana is an independent woman running a designing solutions firm Heartists, her husband is into media sales. This couple from Bengaluru has specialized in shoestring travelling and likes to explore more and more in less expenditure. Chandana has been to 10 Indian states and 3 foreign countries whereas Sunil has visited 23 states of India and 12 different countries. 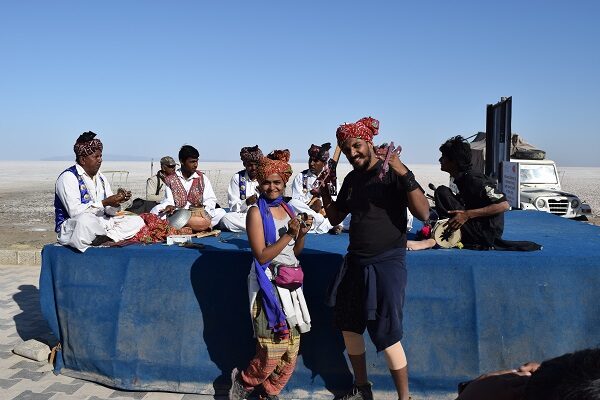 Their visit to Gujarat:

Today, we will take you through their visit to Gujarat and will also tell you about some wonderful people whom they met during their journey.

On a random day, while having a meal at a restaurant, the couple saw a photo of Rann of Kutch over there and instantly made up minds of visiting the place. Without much planning, they booked train tickets to Surat which cost them Rs. 550 and they didn’t forget to keep a tent with them.

Some nice people made their visit memorable:

When they reached the railway station, they found that their train was more than 4 hours late; however there was not even a single moment of boredom after they met Jerry and Pierre who were artists and travelers as well. They met really nice people in the train too and one of them even shared meals with them.

In Surat, Sunil and Chandana were welcomed by a friend who took them around and they tasted some local delicacies over there. They took a train to Bhuj in the night around 10 pm so that they don’t need to book for their stay in Surat. They reached Bhuj next morning and what made them excited about the place was the traditional dress of people. It felt as if they are pretty far from the westernization of clothes. The couple had a great time in Bhuj and they spent night with a local family.

Among the most beautiful people they met, there was a woman named Sundar behen. Just like her name, she had a beautiful heart and she gifted Chandana a brand new magenta blouse which she was looking for. She and Chandana shared an adorable bond which can’t be described in words. 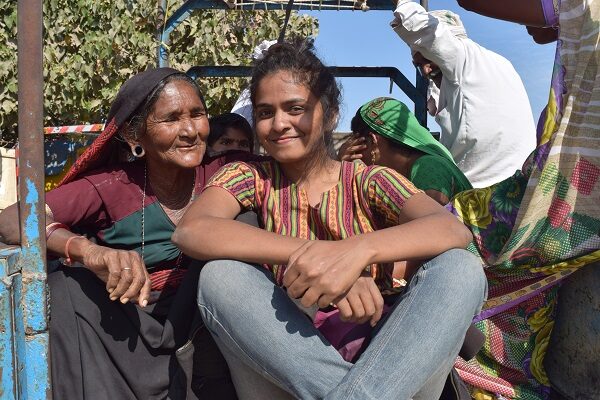 The overwhelming act of the truck driver:

Next morning, they went to bus stand to catch the bus to Rann of Kutch but started walking as the bus was scheduled after 5 hours and it was then that they decided to hitchhike. They got lift in a truck; the driver saw them at the bus stand and was happy to have them in his vehicle. He stopped in between for tea and then he did something which was totally unexpected. He invited them over lunch at his house; the village was pretty vibrant as the little houses were painted with bright colours. The driver introduced the couple to his family members who served delicious rotis and buttermilk to Chandana and Sunil. The couple was into tears after witnessing the selfless love of the innocent villagers and it won’t be incorrect to say that this is real India, full of love, harmony and concerned towards others. 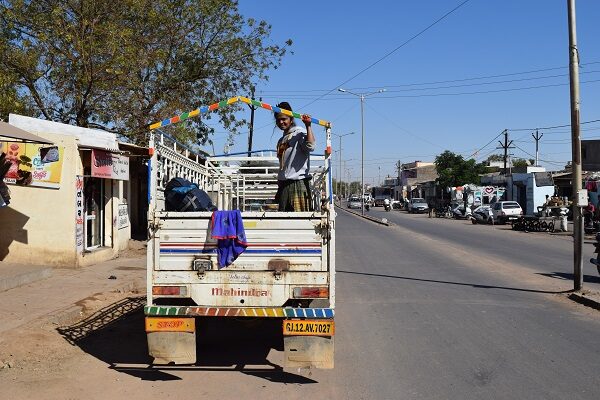 Journey to Rann of Kutch:

After visiting a museum, the couple was again on the roads as they had to reach Rann of Kutch and once again, they were lucky as a small truck owner stopped with whom they stopped at a place from where Tropic of Cancer passes by. 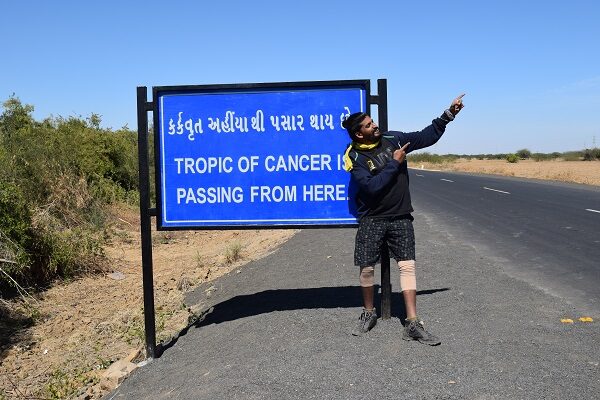 Even after getting lift from three guys, they were left with around 40 kms to cover. That is when they once again got lucky while trying hitchhiking and got lift in a car in which the owner Sujal and his friend Vijay were already travelling. The good part was that they were also going to Rann of Kutch and all four felt as if they are close friends as they communicated with each other. 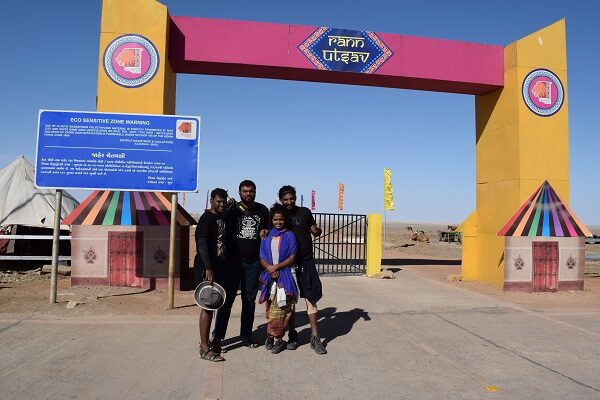 The mesmerizing beauty of Rann of Kutch:

Chandana and Sunil were mesmerized with the beauty of Rann of Kutch as it seemed to be a painting made by the God himself. As far as a person can see, he will see white desert only with blue sky on the top and camels decorated with colorful materials were just increasing the beauty of the surroundings.

The Great Rann of Kutch is a salt marsh in the Thar Desert in the Kutch District of Gujarat, India. It is about 7500 sq km in area and is reputed to be one of the largest salt deserts in the world. Winters (November-Feb) is the best time to visit Kutch, especially on the full moon nights as the reflection of the moonlight on the white sand looks amazing. The Rann Festival is also organized during the same time. #travel #travelphotography #travelblogger #travelblogger #travelholic #travelgram #traveling #travelling #travels #traveller #traveler #traveltheworld #backpack #backpacking #backpackers #girlwhotravels #girlpower #rannofkutch #gujarat #nammakarnatakaphotographers

There were some people from Pakistan who came for trade while there were good amount of army personnel as well as it is a border area. Chandana and Sunil enjoyed the beauty of nature sitting silently over there until it started getting cold.

The divine experience in Kaladongar: 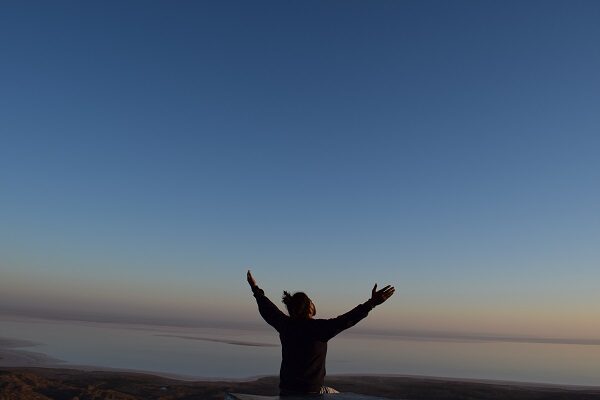 The four then left for Kaladongar which is a hill station, it was already late evening when they reached there. However, the night over there was sleepless as it was freezing and their tents were not able to save them from the cold wind. But the next morning was going to be amazing as they witnessed the early morning golden rays falling on the white salt desert and making the whole place look simply divine.

The couple returned to Bhuj and after spending some time at Swaminathan temple where they also had meals, they left for Somanath. During their journey to Somanath, they crossed a sight which had pretty high magnetic powers where they felt the vehicle was getting pushed.

They reached Somanath early morning, so they slept at the bus stand only and then got refreshed over there as well. Luckily, they met a local auto driver who made them tour the local attractions at a small price of Rs. 150. Their next destination was Dwarka which also gave them a memorable lifetime experience. They also explored the Bet Dwarka, as the legend goes that half of Dwarka got submerged into the water. 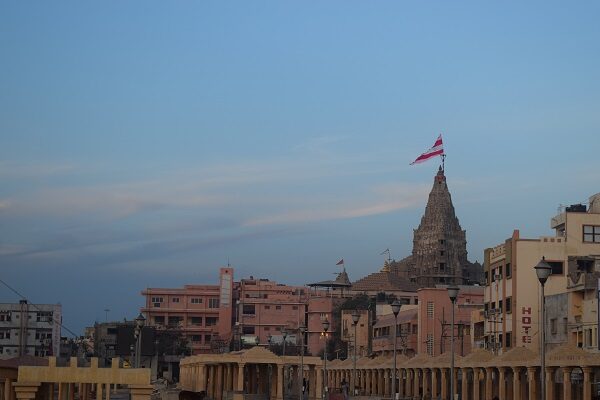 Visiting Ahmedabad and then getting back to Bengaluru:

Afterwards they once again hitchhiked and reached the Dwarka railway station from where they took train to Ahmedabad. They had a great time in this city as they visited the shopping streets and the oldest mosque. In evening, they were also hosted by their friend Sujal whom they met while going to Rann of Kutch.

The magical journey of Gujarat came to an end as they took the train to Bengaluru but it has a lot to take away for all those who love to travel but find it difficult because of monetary constraints.

Chandana and Sunil depended a lot on hitchhiking for their transportation which also helped them in meeting some wonderful people with beautiful hearts and they mostly had their meals in temples and stayed in tents or with local families. In Gujarat, getting food in temples is not a problem as majority of the temples offered food in form of Prasadam.

If you also want to visit places and don’t have enough money to spend, this couple can be your inspiration.

10 Attractions To Visit In Gangtok, One Of The Most Beautiful Places Of North-Eastern India
Foreign Tourist Walked For 7 Months For Exploring Real India & These Pics Deserve Your Attention