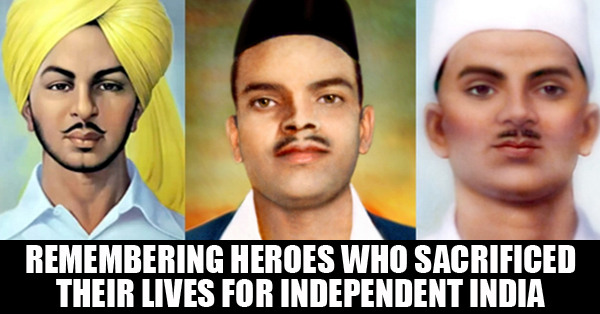 Indian Independence was achieved because of sacrifice of many brave hearts. It has become a customary to remember the martyrs only on Independence Day or Republic Day. People tend to forget the sacrifice of these brave fighters that Mother India had. March 23, 1931 saw the change of Indian struggle for Independence as it brought the masses together to the common goal of Free India. This did not happen just at a fell scoop but was a planned and coordinated effort by our freedom fighters. The death sentence and hanging of Bhagat Singh, Sukhdev and Rajguru on March 23, 1931 brought a reaction from the Indian masses that the British had least expected. These great martyrs were the real children of great ‘Bharat Mata’. Their real motto was that they always wanted to hear “Bharat Mata Ki Jay” and that is why these great personalities are the unique revolutionist who cannot be compared with anyone. They were the real soul of this country. We salute these martyrs and on this Shahadat Divas we bring to you some peeks in the lives of these martyrs and what they did for us.

At a tender age of 8 he thought of releasing India from the Britishers and left home at an age of 15!

Bhagat Singh left home for Kanpur when his parents tried to get him married. He said, “My bride shall only be death” if he had to marry in slave India. He joined the Hindustan Socialist Republican Association.

Bhagat Singh requested not to be hanged! Bhagat Singh had asked that instead of hanging he must be shot to death but the British did not consider it. This is seen by the fact that in his last letter, Bhagat Singh wrote, “I have been arrested while waging a war. For me there can be no gallows. Put me into the mouth of a cannon and blow me off.”

His fast made the world feel hungry He kept fasting for 116 days even though he used to do his all the work regularly such as singing, reading books, writing, visiting court, etc.

His one last act of defiance was shouting “Down with British imperialism.”

He made the British afraid even on his march to death It is said that no magistrate was willing to supervise the hanging. After the original death warrant expired it was an honorary judge who signed and oversaw the hanging.

He laughed out loud when his mother came to meet him When his mother came to meet him at jail he laughed out loud which put the jail authorities in a shock as to how a man who was so near death could be laughing heartily and freely.

No fear of Death at all was rather Happy to die Historical records show that Sukhdev was particularly content with the death sentence awarded to him. In a letter to Mahatma Gandhi, written some days prior to the hanging, he says, “The three prisoners of the Lahore conspiracy case who have been awarded capital punishment and who have incidentally gained greatest popularity in the country are not everything in the revolutionary party. In fact, the country will not gain as much by the change of their sentences as it would by their being hanged.” A little known fact about the plan to drop bombs in the Central Legislative Assembly in April 1929 is that HSRA’s central committee had first refused to send Bhagat for the job. Sukhdev was absent from the meeting where the decision was taken. The party feared sending Bhagat, as the Punjab police was after him for his involvement in Saunders murder. His arrest would have meant death. Shiv Verma recounts in his memoirs, “Sukhdev came after three days and opposed the decision tooth and nail. He was sure no one could convey HSRA’s goal as well as Bhagat. He went to Bhagat and called him a coward, one who was afraid to die. The more Bhagat refuted Sukhdev, the harsher Sukhdev became. Finally, Bhagat told Sukhdev that he was insulting him. Sukhdev retorted saying he was only doing his duty towards his friend. Hearing this, Bhagat told Sukhdev not to talk to him, and went away.” Sukhdev had pushed his friend into jaws of death, writes Verma, adding, “The committee had to change its decision and Bhagat was chosen to drop the bombs. Sukhdev left for Lahore the same evening without saying a word. According to Durga Bhabhi, when he reached Lahore the next day, his eyes were swollen. He had wept bitterly all night over his decision. Such was Sukhdev – softer than a flower and harder than a stone. People only saw his harshness but he never complained. He always hid his feelings.” In words of his friends, “While Sukhdev was indifferent to his looks, he felt happy to dress his comrades. In this he was the reverse of Bhagat.” “He was equally stubborn and whimsical,” states Waraich, pointing to the pen portrait of Sukhdev, written by an HSRA comrade. It states, Sukhdev once poured nitric acid over his left arm to remove “Om” tattooed thereon. This, he did to test his endurance. To remove the remaining marks, he hung his festering wounds over a candle flame. Even in the school days he never uttered a sigh when caned for not saluting an English Military Officer. He even practised perseverance by taking all the blows and elbows of army men without any murmur and even named himself ‘Maarkhaana’ meaning one born for being beaten by others.

Rajguru was born in Pune Rajguru was born as Shivaram Hari Rajguru at Khed, near Pune.

He joined the revolutionaries in Varanasi Shivram Hari Rajguru came to Varanasi at a very early age where he learnt Sanskrit and read the Hindu religious scriptures. At Varanasi, he came in contact with Indian revolutionaries. Enthusiastic to contribute in the freedom struggle, he joined the movement and became an active member of the Hindustan Socialist Republican Army (HSRA).

Great believer of ferocity and fighting against oppression Rajguru did not believe in the nonviolent civil disobedience preferred by Mahatma Gandhi. He believed that ferocity against oppression was far more effective against British rule so he joined the Hindustan Socialist Republican Army, who wanted India to be freed from British rule by any means necessary. The brutal atrocities that the Imperial British Raj inflicted on India and her people instilled within him a strong urge to join hands with the revolutionaries He had a great admiration for Shivaji and his guerrilla tactics.

Places got their names after this great fighter His birthplace of Khed has been renamed as Rajgurunagar in his honour. A shopping complex at Hisar, Haryana has also been named in his honour. Rajguru was known to have a fearless spirit and unconquerable courage. He was also regarded as the gunman of Bhagat Singh’s party. Rajguru joined Bhagat Singh and Sukhdev, and took part in the murder of a British police officer, J. P. Saunders, at Lahore in 1928 to avenge the death of Lala Lajpat Rai. He was tried under the provisions of a regulation that was introduced in 1930 specifically for that purpose. Rajguru was convicted of the crime and was hanged along with Bhagat Singh and Sukhdev on March 23, 1931 at an early age of 23.

We Salute The Sacrifice Of These Brave Hearts

Shocking! Pure Veg Resto In Bangalore Served ‘Chicken’ To A Jain Family! They Realised After Eating It!
“Batman v Superman” First Review Out & It’s Something You’d Never Have Expected!