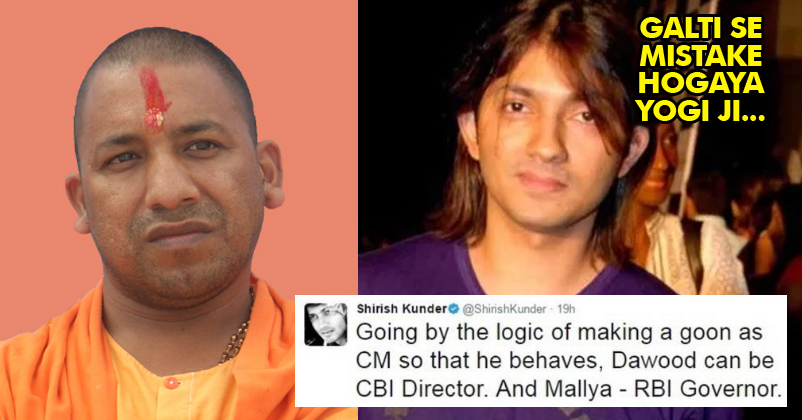 Trolling is a thing on the internet right now. We all do it and it’s healthy, unless and until we don’t kill any person’s personal space. Bollywood celebrities and politicians are always the soft targets when it comes to the business of trolling. But what if one from the fraternity tries to troll the other where the common people have nothing to do?

Shirish Kunder is usually known as ‘that guy who got slapped’ but this time, he slapped a perfect troll on someone who is just having the best roller coaster ride of his life. It’s Yogi Adityanath with whom he tried to mess up. As soon as Yogi Adityanath became the Chief Minister of Uttar Pradesh, a lot of people started sharing their opinion about it. One of them was Shirish Kunder. He gave a response to the people who were trying to justify Yogi Adityanath’s position in Uttar Pradesh. However, he later deleted his tweet. This is what he had tweeted.

Well, the tweet didn’t serve him a good treat as he was later booked under an FIR lodged against him in Uttar Pradesh’s Hazratganj police station. He was severely criticized for expressing his opinion.

UP: FIR registered in Hazratganj against filmmaker and Farah Khan's husband Shirish Kunder for his tweet against UP CM Yogi Adityanath. pic.twitter.com/X2Kgmds3u3

However, Shirish Kunder later appoligized for his tweet. Have a look at it.

Comparing someone who is people’s representative and elected by the mandate to a goon or a terrorist doesn’t sound that well. Shirish Kunder should have considered that. But it’s a metaphor that he used and nothing more than that. However, one also needs to adress the fact that even Yogi Adityanath has a lot of FIR against him regarding such issues where he made a lot of controversial and derogatory statements. Having an opinion about something while expressing it is his absolute right. At the same time, people who are criticizing his opinion also have a right to protest against it. However, filing an FIR on something as petty as a mere criticism is way too much. Remember the time when they all used to crack Manmohan Singh jokes where it was all OKAY to say anything about the current government.

So what do you think about the whole issue? Was it justified to file an FIR against him or is it just too much. Please share your views in the comment section.