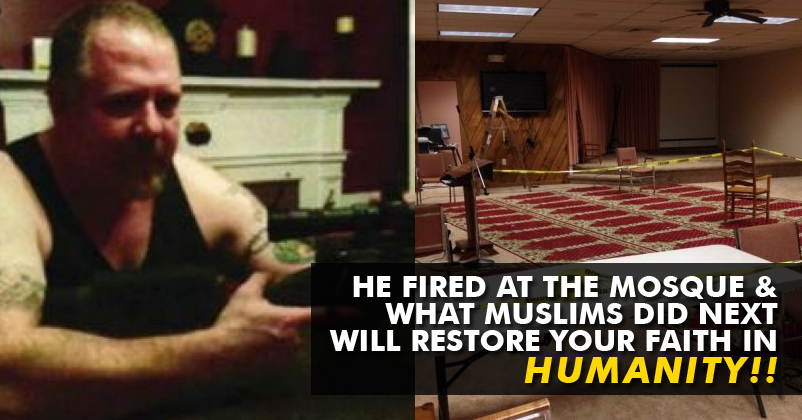 An eye for an eye leaves the whole world blind. Hate and violence are never the solution to anything, they just make things worse. What you’re about to read is the inspiring story of our Muslim brothers who welcomed a man who had drunkenly shot their mosque. They didn’t hand him over to the police, they didn’t attack him, but they forgave him for what he did. This inspiring tale of “Forgiveness over Fear” will change your perception. Ted Hakey, a former Marine, who on the night of the terror attacks in Paris went to a local bar and had 10 drinks. In the early he left for home, reaching home he drank some more and then he loaded his 9mm handgun and an M14 rifle. He took his guns and went into his yard. He started shooting at the side of the mosque next door, he fired rounds at the mosque. Ted Hakey had lived most of his life fearing the Muslims, even his Facebook page was filled with foul remarks and anti-Muslim hate speech. In one post on his timeline, he wrote that he’s living next to a mosque and he’s keeping a watch on them with “binos” (binoculars).In another, he wrote,

“Is Muslim season open yet? I’m in a target rich environment.”

Dr. Mohammed Qureshi, president of the Baitul Aman “House of Peace” Mosque, instead of hating Hakey for his actions, said that he wished he knew Hakey better. He wished that he had been a better neighbor to Hakey and his wife, so that he could have understood their paranoia and hatred against them. So Hakey wouldn’t have fostered the irrational phobia and hatred against the Muslim community. He said,

When we heard that it was our neighbor, we said, ‘where did we go wrong, not reaching out to our neighbors properly?

Hakey had asked his lawyer to ask the Muslim community for a chance to apologize. So when director Zahir Muhammad Mannan and Qureshi got a chance to ask Hakey why he did it. They met Hakey on a Good Friday. As soon as they met Hakey, they offered him chocolate Easter eggs as a gift and asked him to come visit the mosque to express his repentance.

They invited Hakey to an event named “True Islam and the Extremists.” When the Hakey arrived, everyone welcomed him, he was treated graciously without being judged for his actions. Hakey started crying and said

I hope you can forgive me I hope God can forgive me. As a neighbor, I did have fears, but fear is always when you don’t know something. The unknown is what you are always afraid of. I want to help you bridge that gap and help someone else not make the same mistake I did.

Hakey said that he’s a changed man now, the forgiveness he received was so genuine. His wife, Myra, who accompanied was surprised to see the warm-hearted welcome. She said,

There’s so much hate and these people just want peace. Mannan said that the mosque forgave Hakey for his actions, they would offer Hakey all the support and help he needs. He said,

The Quran says everybody deserves a second chance.

Continue Reading
You may also like...
Related Topics:9/11, But They Welcomed Him With Open Arms, forgiveness, He Fired At Their Mosque, Inspiring story, life changing, motivating story, muslim, Religion, Viral stories

Maruti Ciaz Got Hit By TATA Nano & You Will Be Shocked To See The Results !
Big B’s Heart Warming Letter To Navya Naveli & Aaradhya Will Surely Melt Your Heart! Read It…