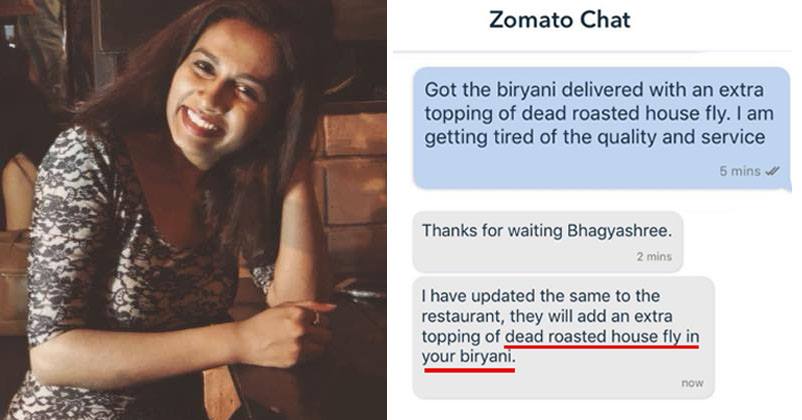 Nowadays, many people use Zomato’s services to order food from the comfort of their homes. The service provider has gained a good reputation for catering to the demands of the clients in a timely and convenient manner.

Of late, we have come across some hilarious goof ups between Zomato and its customers, which became viral on social media. Few days back, there was a shudh Hindi exchange between the customer care executive and the person who registered a complaint.

Today, we came across something very surprising. A resident of Delhi Bhagyashree took to Twitter to complain about her Biryani having an extra topping i.e. a “Roasted fly”. She complained to the executive but got an unexpected reply from there.

She wrote, “Got the biryani delivered with an extra topping of d*ad roasted house fly. I am getting tired of the quality and service”

No doubt, the executive did apologize but there was an unexpected goof-up that happened. He said, “I have updated the same to the restaurant, they will add an extra topping of de*d roasted house fly in your biryani.”

He might have misunderstood the “Extra topping” and didn’t do it purposely. She shared it on Twitter;

Here are the screenshots of the conversation, 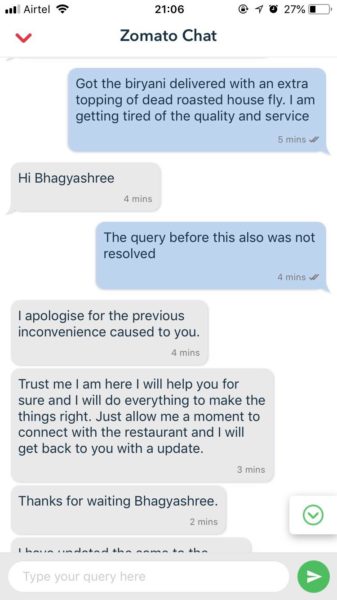 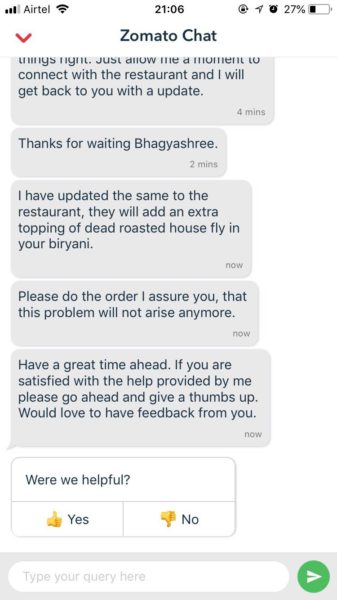 The girl also took to Twitter to specify that the delivery guy shouldn’t be fired because he did apologize.

Also, please don’t fire this person. Whoever it was, did apologise. 😇

Haha, hope Zomato takes a note of this and doesn’t mess up again with those extra toppings. I’m sure no one would like to have them.

Continue Reading
You may also like...
Related Topics:executive, fly, Zomato

After Defeat At Lord’s, Kohli Wrote An Emotional Facebook Post & Requested Fans To Support Him
Poonam Pandey Shows Hot Dance Moves In Dubai. Video Is Being Loved By Fans