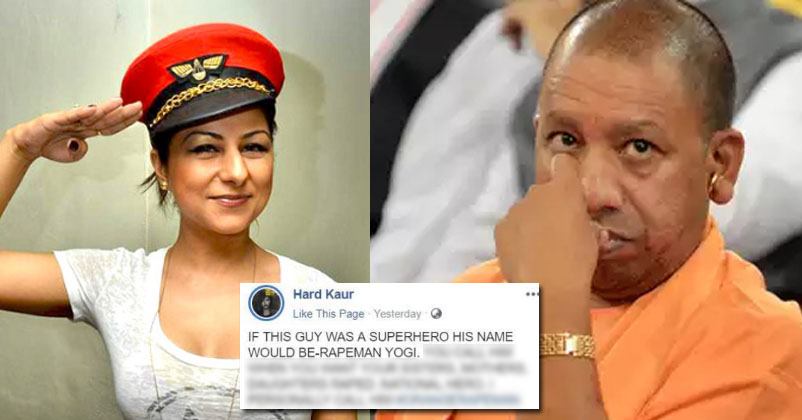 The UK based Indian singer Taran Kaur Dhillon, popularly known by her stage name Hard Kaur gave a controversial statement about RSS and Chief Minister of UP Yogi Adityanath. She called Adityanath an ‘orange rapeman’ and RSS chief Mohan Bhagwat a ‘terrorist and racist’. SHe also blamed them for all the terror attacks happened in India including 26/11 and Pulwama attack.

Sharing Yogi Adityanath’s photo and wrote, “IF THIS GUY WAS A SUPERHERO HIS NAME WOULD BE-RAPEMAN YOGI.”

Hard Kaur held Mohan Bhagwat responsible for the terror attcks in India and with his photo she wrote, “HE IS RESPONSIBLE FOR ALL TERRORIST ATTACKS IN INDIA INCLUDING 26/11, PULWAMA ATTACK. THE FACE OF ALL PROBLEMS IN INDIA. CONSTITUTIONAL CASTEISM IS A CRIME. YOU MOFO’S YOU ARE BANNED BY SARDAR PATEL JI AFTER GANDHI’S MURDER BY GODSE. YOU ARE NOT ALLOWED TO FUNCTION. IN HISTORY MAHATMA BUDDHA AND MAHAVIR FOUGHT AGAINST THE BRAHMINICAL CASTE SYSTEM. YOU ARE NOT A NATIONALIST, YOU ARE A RACIST MURDERER 💯 #fact”

However, Adityanath’s insult didn’t go down well with his supporters and fans and they slammed Hard Kaur on Social media calling her drug addict.

Hard Kaur is either under heavy dose of drugs or she has been denied drugs today.

Don't waste your time on people like them as till their last day, they won't realize or even accept that they are/were wrong. Best way is to unfollow & ignore them. Cut their strength of being heard and they will eventually die a slow death that they deserve.#unfollow #HardKaur

This woman #HardKaur still drinking as she was known as a hard core alcoholic few years back 🤨. I know as I used to drink too 8 years back till I gave it up to become a yogi. Her tweets show she has progressed to drugs 😉. Help her guys. She is calling out 4 help🙏 #PayalRohatgi pic.twitter.com/KrP152EhlE

Let's see if any bwoodiya engages with this psychotic hardkaur n gives her playback job.

Shoaib Akhtar On Alleged Affair With Sonali Bendre: I Haven’t Even Met Her
19.8 Tonnes Rice, Allegedly For Mid-day Meal, Seized From Iskcon Premises