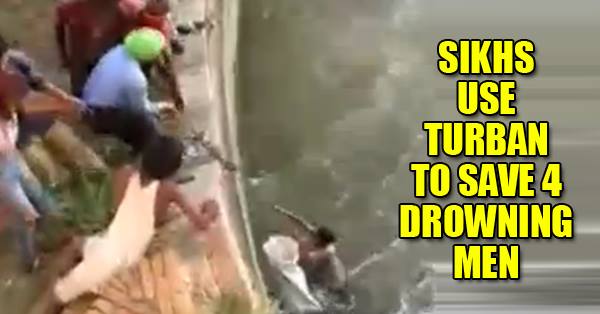 It was some time back in May this year when a Sikh youth removed his turban to save the life of a child bleeding in blood. This is incidence repeated itself.

Two Sikh men, Inderpal Singh and Damanpreet Singh witnessed four men drowning in a local canal in Sanguru, Punjab. In order to help them, they removed their turban and extended as help to them, and pulled them to the safer place.

These four men were celebrating Ganesh Visarjan, when they were pulled by a sudden rush of water into the canal. As mentioned by Inderpal Singh, “I threw my nine-metre-long turban into the canal and pulled out three youths”. Following his action, another person who was a visitor to the canal, Damanpreet Singh also removed his turban and extended to be used pull the men out of the flowing water.

The four men who were saved are identified to be 18-25 years old.


You can also watch this video directly on YouTube

Continue Reading
You may also like...
Related Topics:Sikh, Sikh removes turban to save life