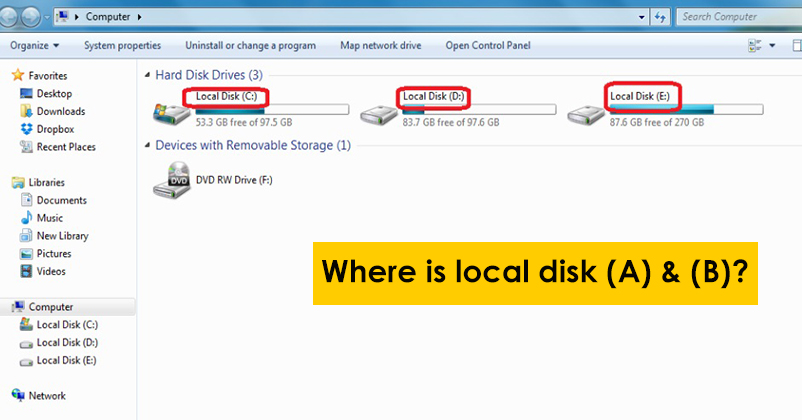 Once upon a time having a computer was considered as a luxury but not anymore it has become a necessity for many of us. With the increase in the usage of Internet and technology, computer/laptop makes our work simple by giving least preference to our location. There is no hesitation in saying that computer/laptop have become a part of our lives. We use it every day for various reasons but we fail to notice some minor things on our computer. One such minor thing is – names of the hard disk drives. Have you ever wondered why the names of the hard disk drives in your Microsoft Windows-enabled computers start from ‘C’? Why don’t they start with A or B? Well, the answer behind this is simple: Floppy disks were initially labeled as “A” but they came in two different sizes, 3 ½” and 5 ½”. So the labeling has been given as ‘A’ and ‘B’ for two different sizes of floppies. This process continued till the 1980s. It was in the late 1980s that hard disks came into existence and they became the primary source for operating systems & storage systems. Hard disk drives started labeling with ‘C’ as ‘A’ and ‘B’ were already assigned to floppy disks. Gradually, floppy disks became outdated and so are their labels. So, ‘A’ and ‘B’ vanished and ‘C’ remained in present day computers. The hard disk drives after C are labeled as D and E and it continues.

One can change the labeling order to start from A or B if they have administrative rights.

Continue Reading
You may also like...
Related Topics:Computer, Default Drive, Floppy Disks, Hard Disks, Here’s Why ‘C’ Is The Default Drive On Most Of The Computers!

After Storming The Telecom, Broadband & Smartphone Market, Jio To Enter The Car Segment
Mark Zuckerberg May No Longer Be The Boss At Facebook, Might Be Forced To Leave