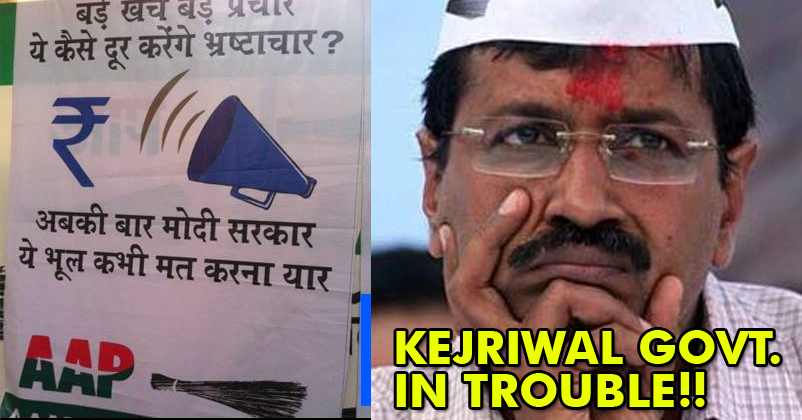 It is hilarious to see the timing of troubles getting showered upon Arvind Kejriwal and his government. The moment when his party needs him the most, he can barely speak due to the surgery which he underwent in Bangalore. In a complaint lodged by Congress leader Ajay Maken, the Content Regulation Committee of India found AAP (Aam Aadmi Party) guilty for misusing public funds in the name of advertisements. In his complaint, Ajay Maken has alleged that Delhi government had violated the guidelines issued by Supreme Court in its judgment dated May 13, 2015 in nine areas. AAP has been found in violation of Supreme Court guidelines and has been asked to reimburse the spent amount back into the public funds. The three member committee was headed by former Chief Election Commissioner B.B Tandon who had been called by the Ministry Of Information & Technology on the direct orders of Supreme Court to address the issues related to Content Regulation in Government Advertising. In its order issued today, “the Committee came to the conclusion that the Government of NCT of Delhi has violated guidelines issued by the Hon’ble Supreme Court of India in six of the nine areas listed by the complainant”. In the order itself, it has been stated that the AAM AADMI PARTY should be made to reimburse the expenditure since the violation of the Supreme Court’s order of May 13, 2015 has taken place. The totaling and assessment of the expenditure is to brought up by the Delhi Government. It has also directed the AAM AADMI PARTY to asses the expenditure spent in advertisements or advertorials which glorifies the name of Aam Admi Party by publicizing the views of the Chief Minister on the incidents that took place in other States, also on the advertisements which targeted the opposition.

Last year Kejriwal Government was accused and strongly criticized for spending a whopping Rs 527 crores for the advertisements alone which was a part of Rs 41,130 crores budget for Information & Publicity itself. However, deputy CM Manish Sisodia the defended his party by bringing up the so called right figure spent for the advertisements. According to him, the money spent for advertisements during the year 2014-15 was Rs 23.7 Crores, while for the year 2013-14 it was around Rs 25 Crores followed by the year 2012-13 which accounted for Rs 24.9 crores. In its order, the panel expressed that a State Government should not advertise outside its perimeters, instead it should be attracting investment, business, talent etc and the designing of the advertisement should be for a particular purpose only, and targeting specific group. It also added that if some Chief Ministers or individuals belonging to that political party think that they are “very special” and their policies are realistic and materialistic for the entire country, then in such cases the political parties should bear the expenditure of such publicity and not the Government on the public funds.

What do you think about the entire saga that took place today? Is it justified on AAM AADMI PARTY’s side to use the public funds for the advertisements of their work? Share your thoughts and views in the comment section below.

6 Months Ago Bombay HC Ordered BMC To Demolish BJP’s Illegal Office At Nariman Point, But No Action Yet
Russia Calls Off Military Exercise With Pakistan? Pakistan Media Has Something Different To Say