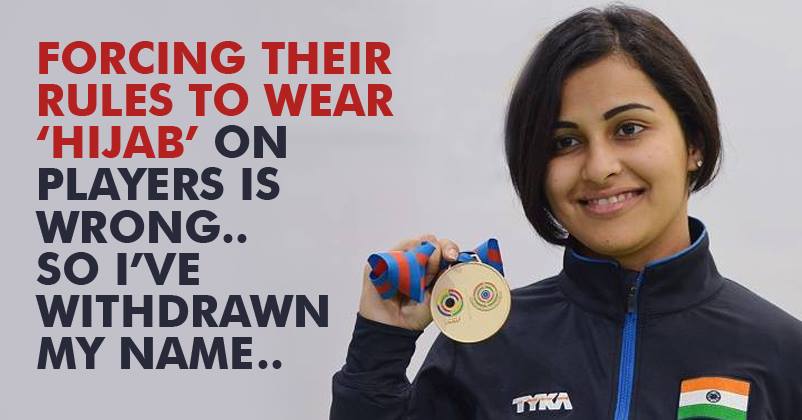 We live in a free world, where everyone has the right to choose. And forcing your own opinion on someone else is the right kind of choice that anyone should make. Forcing your culture, tradition, religion or more precisely your THOUGHTS is definitely not a right thing to do.

Heena Sindhu is an Indian female sports shooter. She is the first Indian Pistol shooter to be Ranked World No.1 by ISSF. She recently pulled out of the Asian Shooting Championship in Iran due to the compulsion forced by the authorities to wear hijab for all women shooters. She expressed her disappointment by saying that no one should force the athletes to wear Hijab since it is against the spirit of the game.

She had a series of tweets;

There have been reports abt me skipping the Asian air weapon competition in Iran due to their practice of making women wear hijab. (1)

I am not a revolutionary!

Im not a revolutionary. But I feel dat making it mandatory for even a sportsperson to wear hijab is not in the spirit of a Sport. (2)

Proud to be a sportsperson!

Sports is an exhibition of performance!

Sport is an exhibition of sheer Human Effort nPerformance. Our ability to dig deep for Strength, Will Power and Determination. (4)

This is d reason I compete n I cannot compete for anything lesser than this. But I wud also not have my personal opinion politicised (5)

I thank the NRAI for respecting my views n I wud also like 2wish luck 2 r team competing in Iran. Lets concentrate on competition dan hijab

“You follow your religion and let me follow mine. I’ll not participate in this competition if you are going to force me to comply with your religious beliefs,” she added.

The notice to wear Hijab was issued on the official website where it was clearly mentioned that the female contestants will have to wear clothes outfits in compliance with the rules of the Islamic Republic Of Iran.

And this is not the first when she has boycotted the championship. According to her, she has done this earlier too. Two years ago, she had decided not to go to Iran for the same reasons. Surprisingly, it is only the Iran who has asked everyone to follow these rules. No other country does like this. However, the President of Rifle Association Rajendra Singh controlled the situation and said that Indian shooters have always respected Iranian traditions.

We have good relations with Iranian shooting federation and we respect their culture and tradition. All females, including tourists and diplomats, wear hijab when they visit Iran. All other Indian female shooters, except Heena, have accepted the decision,” Rajendra Singh

Well, the stand which Heena Sindhu took is worth appreciating. To admire a culture, one doesn’t need to follow it. Everyone has their choice and forcing yours on someone is not a wise option. What are your views on this ? Share your opinion in the comment section below.

Ever Wondered How Lord Rama Travelled All The Way From Lanka To Ayodhya Just Within 20 Days ?
This Man Clicked Pic Of A Car Without Permission In UAE ! What Happened Next Is Shocking!