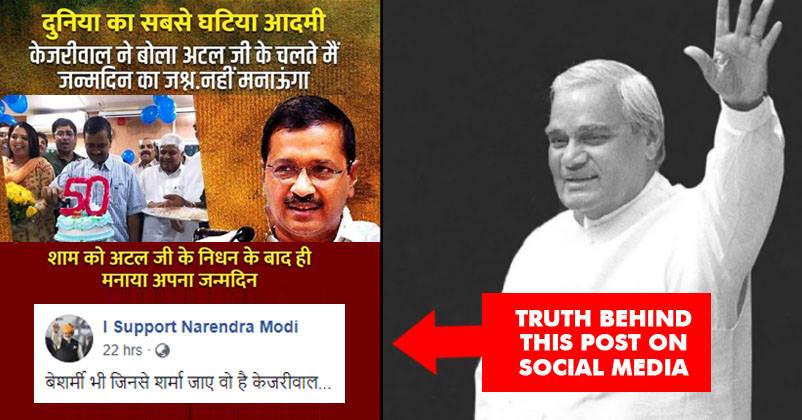 The whole nation is grief-stricken after the former Indian Prime Minister Atal Bihari Vajpayee breathed his last on 16th August but there are some who are still busy in creating controversies.

August 16 is also the birth date of Delhi Chief Minister Arvind Kejriwal and during the daytime, before Atal ji left the world, Kejriwal announced that as Atal ji was critical, he didn’t want to celebrate much on his birthday.

However, a photo of him cutting a big cake is going viral on the Internet and on the cake, number 50 is clearly visible which indicates that Arvind has turned 50.

The pic was circulated by Facebook pages – Yogi Adityanath – True Indian, I Support Namo and Modi Nama as well as on Twitter by various handles.

Online users slammed Arvind Kejriwal for showing insensitivity and celebrating birthday even after knowing that the legend Atal Ji left the world.

Here are some tweets:

In morning,Kejriwal said,"he will nt celebrate his birthday becoz of poor health of Sh.AB Vajpayee ji,"
But in the evening,He only cut cake of 50 kg.
Well played Chameleon @ArvindKejriwal pic.twitter.com/SQ5KtR4ZOO

After celebrating his birthday and cutting 10kg cake, sadji announce that he wont celebrate his birthday…

Kejriwal is the real hero

Pic 1 – Odd Day, @ArvindKejriwal annouced – will not celebrate birthday due to sad demise of #Atalji
Pic 2 – Not even day, but the same day, there was a royal event as his place, he cut 50kg cake on his birthday!

This is Arvind Kejriwal for you…. pic.twitter.com/az65oRS7TO

Look at the real face of Darubaaj Kejriwal's birthday celebrations…. on the other hand cremation of….. our "Bharat Ratna " Atal ji….. Disgusting act… pic.twitter.com/ip9LdCSBTp

While news of Former PM Atal Bihari Vajpayee's health being critical was on air, Kejriwal was busy cutting a 4-tier birthday cake. pic.twitter.com/GipeYBXKW7

40 minutes after cutting a 50 kg birthday cake, Kejriwal announced not to celebrate his birthday, as mark of respect for Atalji.

Media continues to describe this "Dhoort" as Honest and Humble! Yuck! pic.twitter.com/gT1ZDmwaJO

While Nation mourns the great loss of #AtalBihariVaajpayee ji, Kejriwal is busy cutting cake for his birthday celebrations….☹️ pic.twitter.com/eil9Z14HQY

Ankit Lal, the social media strategist of AAP, stated that this photo was clicked in the morning when Atal Ji was alive; however, it is being projected as it was taken in the evening.

If you look at some of the photos clicked during the same time, in one of the photos you can see that the wall clock and a wrist watch are clearly visible, showing the time a little past 11.

Mirror doesn't lie:
When Kejriwal cut cake on BD, the clock on the wall and a wrist watch both read a little past 11 AM. Vajpayee’s demise was announced after 5 PM. Kejriwal called off further celebrations in view of the critical condition of former PM.
Thus, sanghis are idiots! pic.twitter.com/2O0IMICReT

A video was also shared by AAP official Twitter handle at 12:09 pm in which Arvind Kejriwal could be seen announcing that he would not celebrate his birthday as Atal Ji was critical.

Delhi CM @ArvindKejriwal opts not to celebrate his birthday due to critical health of #AtalBihariVajpayee Ji & the floods in Kerala.https://t.co/cAZGIpbDtn

Taking the sequence of events into consideration, we can say that Kejriwal cut the cake at about 11am and after an hour, he made an announcement of not celebrating further and then went to AIIMS for visiting Atal Ji between 1 and 2pm.

We request people to find out the truth behind every piece of news that they find on social media and then only react.