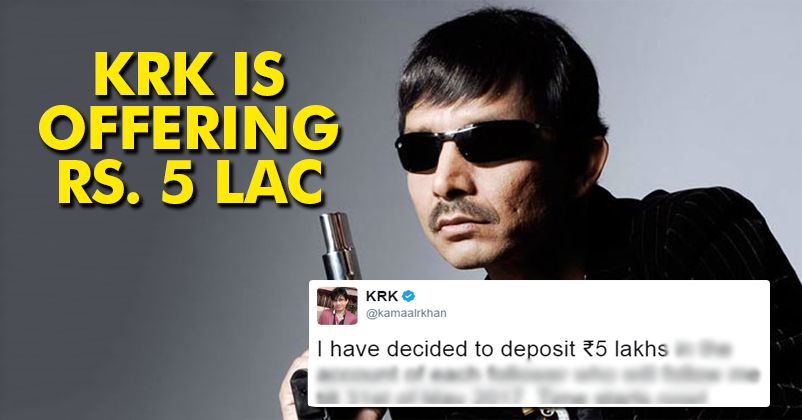 KRK is a man of fake and weird promises. The bigger his promise, the more likely he is to break it.

Remember, back in 2014 he promised to leave India if Narendra Modi gets selected as a Prime Minister. KRK, later said it was just a joke and took U-Turn from his statement. Not just this, he promised to leave Twitter several times, but again took his words back. No matter how much people troll him, he never feels bad and gets back to be the centre of jokes. It’s not been too long when he was being trolled for using insulting words for South Superstar Mohan Lal and now again he is back.

KRK on Sunday tweeted that he will give 5 lakh rupees to everyone who follows him on his Twitter account. Can you imagine that?

I have decided to deposit ₹5 lakhs in the account of each follower who will follow me till 31st of May 2017. Time starts now!

What happened next, you can see yourself-

I have decided to deposit ₹1 in the account of each follower who will unfollow @kamaalrkhan till 31st of May 2017. Time starts now!

Now this is what we call giving it back. KRK must have thought that he can manipulate people so easily, but he got the answer rightly. What do you think?