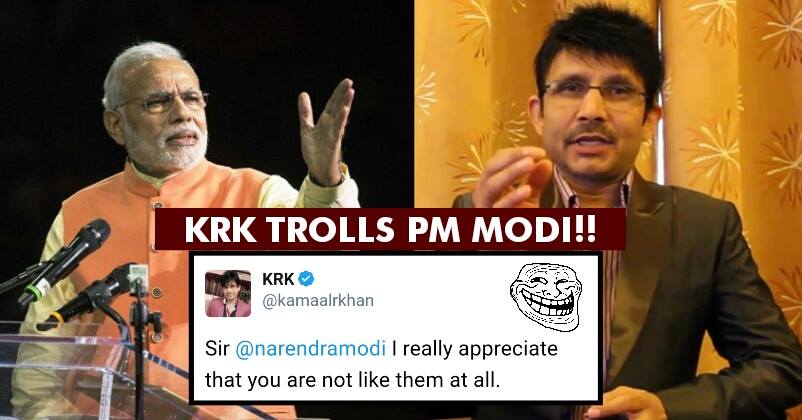 Prime Minister Narendra Modi is often criticised by people for not being able to control terrorism the way he promised to country. Today when Pakistani soldiers Killed two Indian Army Jawans on LOC and multilated their bodies, KRK trolled him. KRK shared Narendra Modi’s couple of 3 year old tweets and quoted it with a message which very much looked like a Sarcastic dig.

3rd front leaders are silent when people face crisis & soldiers are beheaded. They rise before elections & go back to sleep till next polls.

Centre is unable to give a strong answer to Pakistan's inhuman acts. Beheading of our soldiers & now Sarabjit's death are 2 recent examples.

KRK quoted these old tweets of PM Modi and took a sarcastic dig. This is how KRK trolled Narendra Modi

We all know KRK has a knack of trolling everyone on Twitter and then being trolled for the same. But this time people actually supported him. Checkout what people tweeted back –

KRK sir I m really fan of ur political tweets!! what a fabulous troll!!

Its fun to read old diaries.

PM sahab what you think about this .

Bhai these are politicians they can only use jumla a not action …. but some blind bhakts are there who will support them

What do you think? Would you support KRK for taking a sarcastic dig at PM Modi or you will bash him? Share your thoughts in comment section.

Surprise! This Actor Has Dubbed His Voice For Prabhas In Bahubali 2 & We Bet You Can’t Guess!
Kajol Brutally Trolled On Social Media For Eating “Beef”! She Even Issued A Clarification Later!