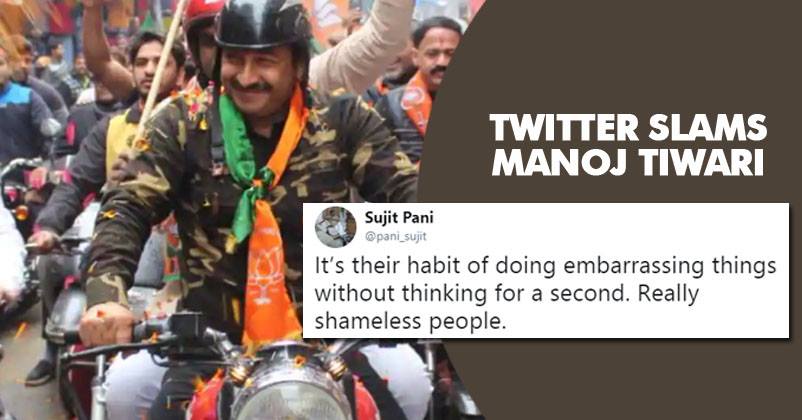 After the Pulwama incident on 14th of February, where more than forty of our CRPF Jawans lost their lives, when a SUV full of 350 kg explosives rammed into their convoy, the military and political tension between India and Pakistan escalated to a great extent.

After this our Indian Air Force launched air strikes on the terror camps along the Line of Control.They demolished JeM’s training camps as well as launch pads. Currently both the nations are dealing with the worst of war like situation, where the border is now dominated by ceasefire and air space violations.

Among all these, Delhi BJP Chief Manoj Tiwari faced criticisms when he was seen donning a military fatigue. He was criticized by everyone including his oppositions as well as from the common people. He attended a BJP bike rally wearing a camouflage shirt.

When we are witnessing the worst of situation, political parties are accusing each other of politicizing the recent military actions. TMC leader Derek O’Brien and Congress leader Sharmistha Mukherjee slammed Tiwari by labeling this as ‘shameful’ and ‘utterly disgraceful’.

But not shameless to say 'Armed Forces ' in caps, like there any green fatigues are offcial army/ BSF clothes? We have freedom of expression. I think wearing green clothes shows solidarity with the cause. 1. we need to defend our borders with iron resolve .2. care for protectors

Plz send him to Kashmir and ask him to guard border just for couple of days. Then he will no what is the value of Army or BSF uniform. Actually he has been banged by public so many times that shame has gone. It is insult of our soldiers and this enough to call him antinational

Continue Reading
You may also like...
Related Topics:BJP, manoj tiwari