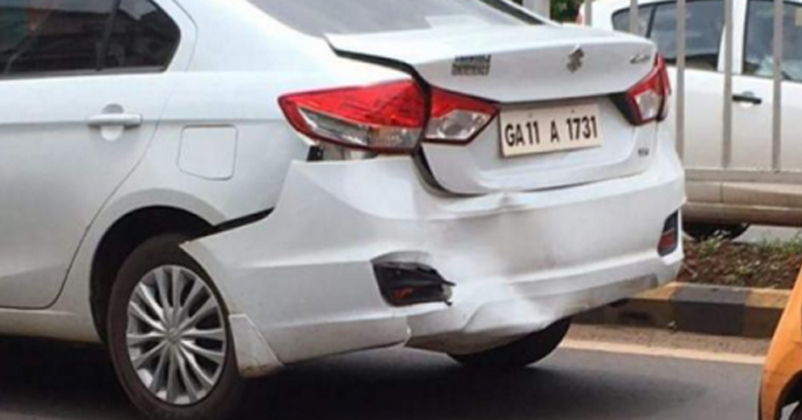 Results are always shocking. Whether it is about our exams or about our life. And this time when a biggie like Maruti Ciaz had a face off with a nutshell Tata Nano, results are again how they are suppose to be – SHOCKING ! ! The incident has taken place in Goa where a Maruti Ciaz was hit by TATA Nano and to our utter surprise, Maruti Ciaz was more damaged than TATA Nano.

However, if we had better data about the kinematics of the situation then we could have better judged the scenario. But if we still look into the heavy criticism that TATA Nano underwent during it’s launch in 2008, such a result is still surprising. Have a look at the picture of the damaged Maruti Ciaz ! ! The Maruti Ciaz looks badly damaged as the bumper has come off and the boot lid has got dislocated. The impact is for sure not a light one. However if we look at the TATA Nano, results are surprising. The TATA Nano’s bonnet shows a dent while the front bumper is dislocated which is something way more less than we had imagined. The reason for such a result is because of the short size of TATA Nano’s crumple zone which makes the damage less extensive as compared to that of Maruti Ciaz. However we can’t rule out the fact that this may cut the repair bill for TATA Nano but will also transmit more force to the passengers of the car which is something not that great ! !

The Maruti Ciaz’s crumple zone has taken most of the impact which indeed shows that it has done it’s job and thus has saved the passengers from getting heavy shocks during the impact. However in the case of TATA Nano, things are completely opposite. Nonetheless, the passengers of both the cars are completely safe and fortunately no injuries have been reported so far.

However we should be taking some lesson through this accident because according to a wise old man, an intelligent person is the one who learns from the mistakes of others not by his own. Such kind of accidents can be easily avoided if we follow these 3 rules.

1. Do NOT Tail Gate – This advice is especially for those people who drive at high speed. By the term ‘Tail Gating’ we mean driving too close to the car which is apparently in front of you. In such situations this does not give the driver of the 2nd car to apply brakes in case the first driver brakes hard.

2. Use the ‘Three Second Rule’ – If you are driving at higher speeds, e:g 60 Kmph or above, always make sure that you cross a stationary object like an electric pole after 3 second once the first car has crossed it. In wet season, extend this time to 5 seconds.

3. Always stay alert – It does not seems that great to do but anticipating accidents while driving always helps you to pay more attention which indeed helps you to avoid accidents. Not paying attention to the car in front, even on roads with medians means that you won’t be able to stop or evade in time.

If you have some more suggestion for any new or inexperienced driver please share it in the comment section below !!

Take A Look At Mumbai’s Top Richest Ganpati Mandals And Their Lavish Insurance Policies!
He Fired At Their Mosque, But Muslims Welcomed Him With Open Arms Because…