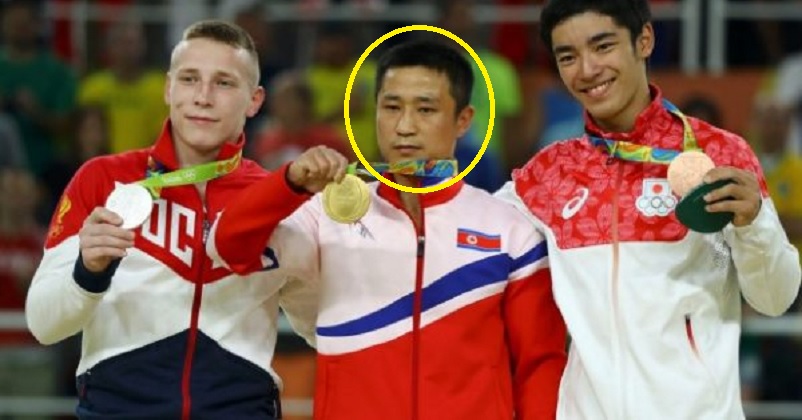 Emotions are somethings that you can’t hide no matter how tough or rough you are. Even if a part of it comes under volunteer actions, you can still feel how involuntarily you want to cry out loud when you are in deep pain. People say that you should not bury your emotions. But sometimes hiding your emotions or feelings can be the only solution to the problem.

Today, the whole world is wondering about what made this Olympian to hide his emotions when he won the most prestigious award in what is known as the Mecca of Sports, The Olympics. Olympians spend their entire lifetime for even qualifying in this sporting event, but it is quite surprising to see him expressing nothing. The Olympian name is Ri Se-Gwang and he is from North Korea. OKAY, Hold On, No wonder he was SAD ! !

Ri Se-Gwang won the Gold Medal by pulling off an impressive vault routine overtaking Russia’s Denis Ablyazin. At the heat of the moment and excitement when he got to know that he successfully completed the vault, he did punched the air in joy. But looked quite sad or what we call as ‘Lack of emotions’ during the award ceremony. Watch The Video Of His Performance.

When he was awarded the Gold Medal, he did a military salute and later insisted that he was indeed very happy. Well, of course he was happy, but a little smile could have done something good for the photographer. “I was filled with joy because I thought I was able to bring a sense of victory to our leader,” he was quoted by the Daily Mail as saying.

Now, people have various theories about him for being a sad gold medalist which he is NOT. And it’s funny to see the amount of energy being channelized to crack the reason. Wish they had done it for Mona Lisa Painting too.

Here are some tweets.

Some people also claim that his reaction on winning the medal reflected his desperation with Kim Jong-un’s North Korean regime. Well, if we ignore the possibility of boot licking, may be they are right. JUST SAYING ! !

Officials from North Korea have accompanied the athletes to Brazil, on the strict orders of the country’s government. Also, before this week, there had been few controversy related to the North Korean campaign when the the Supreme Leader Kim Jong Un ordered to confesticate the handsets of Samsung GALAXY S7 handed out free to its athletes due to the concerns of trying to contact the outside world without his prior permission.

Well whatever we predict, he is the only person in the whole planet who knows the reason for him being sad. Or may be, if we look at the brighter possibility, he is indeed happy but just as expressionless as Kristen Stewart. Tough Competition. Even she would express some emotions if she wins an Oscar, but this guy is indeed tough. What are you views and if you have your own theories about it, we would like to hear them too.

This Video Will Show You How PV Sindhu Rocked The Game By Climbing From 10-10 to 21-10
Big B Trolled Shobhaa De While Congratulating PV Sindhu On Twitter!