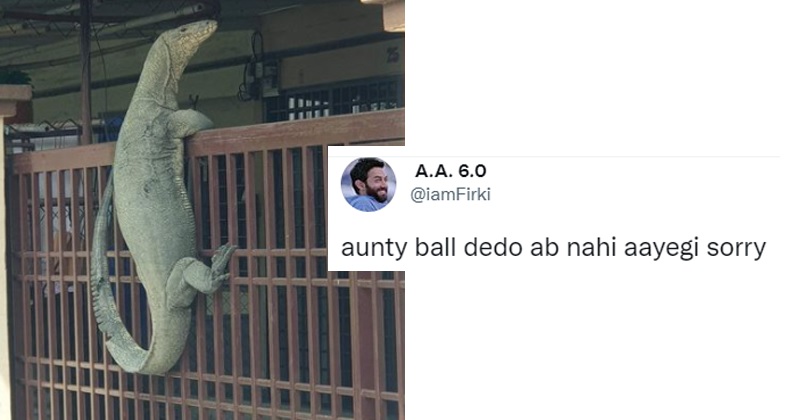 The social media networks have become a great place for us to share knowledge, interesting facts, weird incidents, etc. and there have been times when we have witnessed some really bizarre happenings which have been turned into memes and jokes by the creative fraternity present on the virtual world.

Photos and videos related to the wild animals have also given us many moments to laugh and sometimes they have scared us as well but recently an old photo of a monitor lizard resurfaced on social media and gave enough fodder to netizens to have some fun by means of hilarious yet pretty relatable memes that will make you go ROFL.

A bizarre incident took place in Johor, Malaysia, in 2019 in which a man found a monitor lizard on the front gate of his house when he returned to his home. The name of the man is Long Cherng Yee and he made a Facebook post about this when he saw that the lizard was in no mood to leave the gate and kept on holding it for hours.

Long Cherng Yee captioned his post, “You might have pet dogs at home but I have a small crocodile here”.

Though the news and the images went viral in the year 2019, this pic recently again resurfaced on Twitter and soon the micro-blogging site was flooded with memes and jokes.

When deadline of Hostel is still 10pm and you reach at 10.05 pm pic.twitter.com/mqRs6igGDV

When girl's are practicing dance for school event.

Which one did you find the most hilarious?

This Brand Is Selling Our Desi Lungis With Minute Changes For Rs 13K, Twitter Goes WTF
Shashi Tharoor’s Pic Breaking A Coconut While Celebrating Onam Is A Viral Meme Now