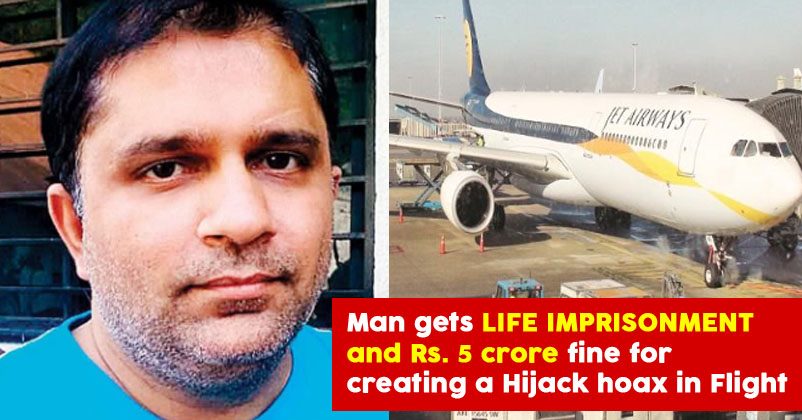 A Mumbai based businessman Birju Salla has been given life sentence and a fine of ₹5 crores for creating hoax about plane hijack in 2017. A special National Investigation Agency (NIA) court in Ahmedabad passed the judgment on Tuesday.

In October 2017 Salla planted a threat letter claiming that there were hijackers on Mumbai-Delhi Jet Airways flight. The letter demanded the plane to be flown straight to PoK and if it landed anywhere else people would die. It also added that a bomb has been planted in the cargo area.

The letter obviously caused ‘severe mental stress and trauma which was unimaginable’. So as a compensation court has imposed a ₹5 crore fine on Salla. Out of the whole fine amount, ₹1 lakh is to be paid to both the pilots, ₹50,000 each to two flight attendants and ₹25,000 each to all the 116 passengers who were on board.

One of the flight attendants found the letter and the plane had to make an emergency landing in Ahmedabad. Salla was arrested October 30, 2017, and the case was handed over to NIA.

The agency found out that Salla wrote the letter just to cause problems for the woman he loved. The woman refused to live with him and was a Jet Airways employee. Salla planned all this to shut down the airways and for the woman to lose her job.

NIA even got the evidence that Salla typed the letter in English in his office and used Google to translate it in Urdu.

New Law In Bihar : Jail Term For Children Who Abandon Their Elderly Parents
Maharashtra Teenager Accidentally Shot Himself While Shooting For TikTok Video