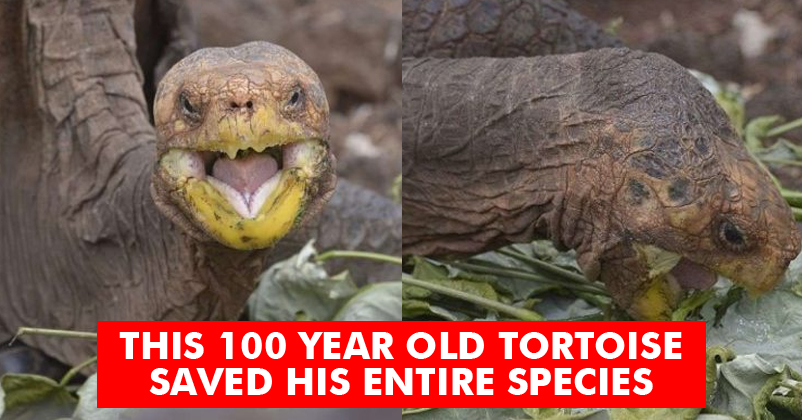 They say no matter how old you are, if your rocks are solid, you are certainly good to go for it ! ! And the commitment shown by this old tortoise is certainly worth appreciating. When the entire species was in danger of getting extinct from the planet earth, this wise OLD Tortoise came into the rescue for it’s younger generation and took the matter into his ‘ahem ahem, the thing’

Diego the tortoise is certainly the LADY’s Man who does know how to make it happen. He along with a dozen of female partners nurtured their offsprings which are now counted as high up to 800. It is interesting to note that they started out this ‘remedy’ with just 13 of them. This incident is from the native island, Espanola, the southernmost in the Galapagos Archipelago. It is reported that 50 years ago there were only 2 males and 12 females of Diego’s species living on Espanola who were too spread out to reproduce. He has indeed contributed a lot to turn the numbers in his favours for becoming a species saver.

Diego is at least 100-years-old, weighs in around 175 pound being 35 inches long in length and if he stretches hard enough, he’s about 5-feet-tall. He lives at the center for tortoise breeding on Santa Cruz Island which is one of the largest islands in the Galapagos. In his enclosure, there are 6 other female tortoises who are Diego’s partners in the noble job of saving their species. Four years ago, a genetic study found Diego was the father of “nearly 40 percent of the offspring released into the wild on Espanola,” Tapia said. It is funny to note that while mating, the female counterparts are usually silent while the males make sounds which is quite similar to that of a cow’s ‘MOO’. Such tortoise spend almost 16 hours a day for resting and usually mate from January to May – The hotter months of the year. According to the Galapagos Conservancy, a female giant tortoise can lay 1 to 4 nests during the season from June to December. The no. of eggs in a nest can range from 2 to 7 for saddle-backed tortoises and 20 to 25 eggs for domed tortoises.

Diego has been in the captive breeding program ever since 1976. He was brought back home from the San Diego Zoo. He is thought to have been taken from his island between 1900 and 1959. Before Diego, there was this tortoise named Lonesome George who had been given the task of breeding to save the species. He died in 2012 at more than 100-years-old after years of refusing to breed in captivity, TOUGH GUY ! ! “I wouldn’t say (the species) is in perfect health, because historical records show there probably used to be more than 5,000 tortoises on the island. But it’s a population that’s in pretty good shape — and growing, which is the most important,” said Tapia.

Well, at last on a personal note, it’s funny to read and prepare a report on a tale of a Tortoise s*x life whereas the fact remains the same that millions of people are still starving for it ! !

Gang Uses Chili Powder To Steal 950 iPhones Worth Rs 2.5 Cr!
Weirdest Crime Ever! This Woman Was Arrested Because She Stole ‘3 French Fries’ ! Check Out…