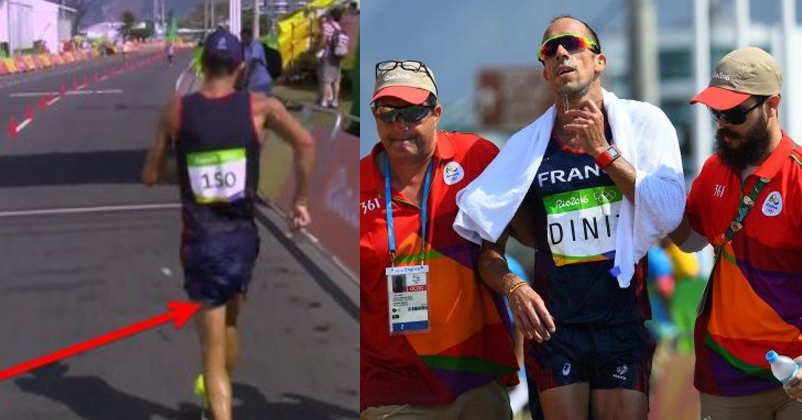 Excuses are the most easiest and obvious dialogue than one can exchange for hiding out his or her incompetence. If you couldn’t do it, admit it and try harder rather than blaming the whole world around you. But Yohann Diniz had no complaints or whatsoever for not making it to the top 3. Medals don’t really matter, dedication and hard work does. And what really happened back there on track, does proves that he is indeed a man who never quits. It is a story of inspiration. Yohann Diniz is a French Athlete who was competing in Men’s 50km Walk Final in Rio Olympics 2016. He maintained a good lead till the 45th minute of the race but soon things started to go ugly. Cameraman recorded the whole event and from the video it is clearly seen that Yohann Diniz was struggling hard to even walk. He is one of the best racers in this sport and it was surprising to see him struggling like this.

Later on, a dark brown color liquid started to trickle down from the back of Diniz’s legs after he defecated during the race. It was definitely the most toughest moment for him not because of the embarrassment but because of the realization of the fact that he will not make it to the top positions. An hour later after struggling like this he finally collapsed on track and few seconds later dragged himself out to the corner so as to make way for the other athletes. And here comes an another reason why Olympics is more than just medals, it is about the sportsmanship. The athlete, Canada’s Evan Dunfee who managed to surpass the apparent leading runner Yohann Diniz picked him up back to his feet and then they started racing again.

And this is how true champions never fail. Yohann Diniz proved it that he is the man of steel and despite of such difficulties which we can hardly imagine ourselves to be in, he did manage to finish at the 8th position. And all those people who are mocking about his 8th position, let me remind them that finishing off at 8th out of 81 athletes, out of which 31 of them didn’t even finish the race, it was not that easy to achieve such a big feat when your body doesn’t really supports your desires and dream for something bigger. He is indeed a true champion and even though he didn’t win any actual medal but he did win the medal of determination for sure. And that’s how winners don’t lose. Winning is not about coming first, it is about not losing hope. It is about staying dedicated to what you dream off and working hard for it.

Continue Reading
You may also like...
Related Topics:diniz, olympics 2016, This Olympian Pooped & Started Bleeding While Racing & Still Finished at 8th Out Of 81 - RESPECT, yohann

These 14 Pics Of Carolina Marin Who Defeated PV Sindhu Show She Is Beauty With Athleticism
Salman Khan Fans Abuse National Hero Yogeshwar After His Loss. DISGUSTING!