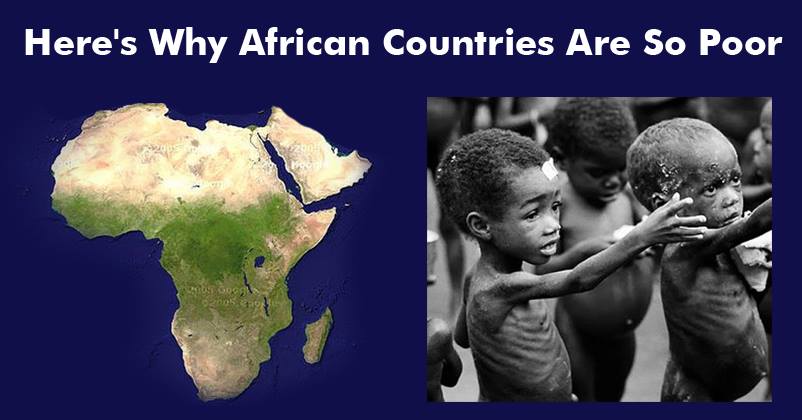 Africa ! ! Whenever I hear this name, a question always pops up in my mind. Is it a land of opportunities or just a lost continent. Africa has gone through so much during the last couple of decades that now, it needs a Steven Hug. The reason why I call it a land of opportunities is because, none of the countries that have ruled on it tried to tap the potential of the people living in it.

The reason for my other perception is because of the kind of rulers they had and have chosen for themselves. Do they really want to help them ?

Well, there is a reason why we call words like cheating and fraud as human nature. Because we humans indeed do this despite the fact that we need each others help.

Decades after decades, politicians and International Organizations have failed to tackle the problem of poverty in Africa. Nor have they been able to generate growth or build basic infrastructure for the people living there. Worse, between 1975 and 2000, Africa was the only place on Earth where poverty has intensified.

Now the question is Why are the African Countries so poor, despite the help of so many international organizations. The first reason is Corruption.

Yes, we Indians are not the only people suffering from it. Nearly 75 Million people in Sub-Saharan Africa had paid bribe in the last year. Some of them paid just so as to escape punishment by the police or courts, but many people were forced to pay to get basic services that they needed desperately. According to a survey, 22% of Africans who had contact with public services admit that they had paid bribes in the past year. In Liberia the figure was 69%. In Kenya and Nigeria, two of the most important African economies, it was 37% and 43% respectively. Across the region, a majority of respondents said that they thought corruption had got worse in their country in the past year. In South Africa, the figure was 83%. The most affluent respondents were half as likely to have paid a bribe as the poorest.

The second reason is because African governments are negotiating deals with international investors that are complete replicas of colonial arrangements which indeed is the reason as to why Africa is so poor as a continent.

Now let me crack this for you.

The wealth of a nation can be tracked by the complexity of the products it exports. The more complex is the product, the better is the price that they get for exporting it ! !

When you try to make a simple product more complex, then it consumes human resources as well as natural resources too, thus resulting in creation of new jobs and in turn giving more work to many companies in the value chain of that particular country.

Now lets play a game. A QUIZ. Which country comes first in your mind when we talk about Highly Developed Country ?

Now if you do a simple google search on the major exports of USA, you will get to know that Automotive Industry has the biggest share in exports, quite a complex thing. Hence more jobs, more wealth and what not ! !

Now lets have another quiz game, Which country comes first in your mind when we talk about Highly Under-Developed Country ?

Answers might be Nigeria, Somalia, Uganda etc etc. Lets see what do these countries export ! !

Now just ask yourself, are cats, bananas really complex ? No. So the law of economics (If there is any) does proves that you need to export complex goods so as to develop.

Another reason for African Countries still being poor is due to the burden of foreign debts. The foreign debt of African countries have increased so rapidly in recent past years that threats of bankruptcy hover across the entire continent, raising the possibility that Africa’s most serious crisis will be triggered not by drought, but by debts.

The foreign debt problem is not only slowing country’s economic growth and increasing poverty; it is also igniting financial instability by forcing these nations to ignore the social and economic development in order to make up for debt payments. As I stated earlier in my first point, people in many of these countries are denied the most basic public services as their governments devote more towards diminishing export earnings, their main source of income, to economic and political survival.

Now other than these reasons which I have stated, there are many other reasons too like High Climate Condition which often leads to drought and thus results in poor Agricultural Growth. If the agriculture sector of the country is not healthy then you can’t really dream about good future of the country. Apart from this, the other causes are civil wars happening in many part of different countries to overthrow the existing governments and also due to the outbreak of deadly diseases like EBOLA and HIV ! !

Now I don’t want to stretch the article by writing down every single bit of everything, so I urge all my readers to write down any point in the comment section below if I happened to miss that.

This Couple Cancelled Their Marriage & The Reason Is PM Narendra Modi!
Everything You Need To Know About India’s Paramilitary Forces.!!