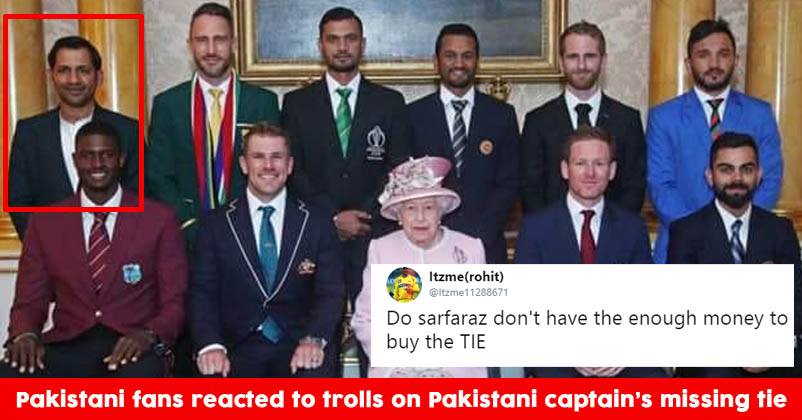 Just before their big game, all the ten skippers of the cricket teams playing in the ICC World Cup 2019 met Queen Elizabeth II and Prince Harry on Wednesday. While all the captains sported formal look with their team blazer on top, Pakistani team captain Sarfaraz Ahmed stood out of the crowd in a traditional outfit with the blazer.

Ahmad’s Pakistani fans felt proud and they praised him for sticking to his roots.

Way to go Sarfaraz! Check out PIA's pride, our very own captain looking handsome as ever in our national dress and we wish the best of luck to team Pakistan! Break a leg! #PIA #CWC19 @SarfarazA_54 pic.twitter.com/zfxdPYlIsQ

What do you feel when you see your big brother standing proudly behind the Queen in national attire? Immense Pride.
No matter what the world says we will always believe in you and your hardwork. @SarfarazA_54 #WeHaveWeWill pic.twitter.com/vV7WlDoFnd

However, columnist Tarek Fatah was not at all impressed by Sarfaraz’s outfit and mocked him on Twitter.

Every other captain, Afghanistan, Australia, Bangladesh, England, India, SouthAfrica, NewZealand, West Indies & Zimbabwe is smartly turned out in jacket & tie, but no, not the Pakistani. No sir, not him. I’m surprised he didn’t come in his Lungi-Banyan-Topi costume. How does …?

Following Fateh’s tweet, several twitter users came in defense of the Pakistani cricket team captain and applauded him for wearing the traditional outfit.

I differ on this. what is the harm if someone dresses in his own country's dress. why it is essential to wear suit in England? If that be so, will every foreigner visiting PM Modi, should essentially wear kurta paizama? and alternately should all ladies wear skirt in England?

He is sticking to tradition; that's in a way rebellious. Why follow the British code. Although it's a different story, it's brit games played in britain; who ruled us for Centuries.

Do not agree with you this time Tarek Saheb, if someone is wearing the national dress, Perfect. Let us come out of this slave mentality. Would have loved if Virat also had some Indian dress. Let is not criticise just for the sake of criticism

If Colonial Hangover were a person https://t.co/HGUmrrH1Ws

70 yrs after independence, some still haven't come out of the slave mentality. https://t.co/qgSM6eLpCe

I am sure if the queen ever visits Pakistan or India she won't wear Shalwar/Kameez or sarhi. There is no shame in wearing your traditional dress. And there is totally no harm in not poking your nose in some other person's business. https://t.co/Xj7IWkoTy1

Now in the month of Ramadan, can't say anything but I really wanted to.
Anyhow #Pakistan captain simply came in his cultural dress. Shalwar Kameez and the Team's jacket. When the Queen wasn't offended, why wud this drum beat itself?#CricketWorldCup https://t.co/cILgLEs8Ic

What's more important here is that he is keeping is head high and representing his country. How does ot really matters what he wears? And what's wrong in wearing the traditional clothes?
I think it's very thoughtful.
#CWC2019 @ICC @TheRealPCB https://t.co/Qm8wuh8qO1

Tells a lot about his post colonial mentality that hasn't came out of the slavery yet. 👇 https://t.co/NJAOxK0CKP

Its called patriotism 🇵🇰 which you can never understand. #CWC19 https://t.co/0LCaPHr226

I'm not even Pakistani but I'm proud of this man for embracing his roots like this. Well done Sarfaraz! 👏 #respect https://t.co/N3lDxGSaPS