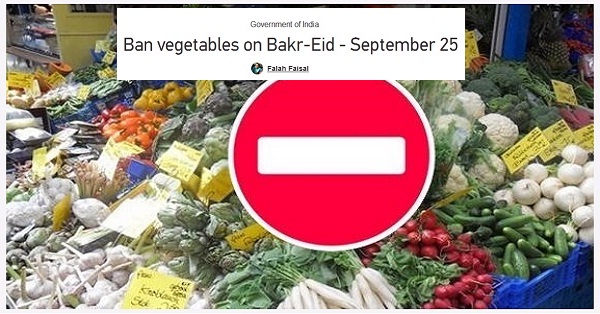 I guess you don’t need to recall the senseless ban on meat during Jain Festival, which created a lot of stir on the internet and government had to face a lot of criticism because of it. The frustration of mass was not to hurt the feelings of any religious community but to support the people who lost the only mean to earn money for the day. Although, the ban has been removed since past several days, but seems the aggression and frustration is still intact in people’s mind.

A Bengaluru based filmmaker Falah Faisal has apparently filed a petition on Change.org
asking to ban the sale of vegetables on the occasion of Muslim festival Bakr-Eid.

In the petition the filmmaker sarcastically mocks the Indian Government by stating “If non-vegetarians were enforced on a ban due to other religion’s community festival, then why not ban the sale of vegetables just for one day for sake of Muslim festival Bakr-Eid. After all, plants have feelings too.”

He also suggests Vegetarians to fast for a day, who doesn’t eat anything but offshoot of plants.

In a calm manner at the end, he also invited people to his house for a plate of Mutton Biryani.

Falah Faisal has already got 1,029 people who signed the petition and needs another 471 to make it to 1500.

Will you sign the petition? What are your thoughts on the matter. Let us know in the comments section below.
Source

Continue Reading
You may also like...
Related Topics:A Petition By A Flimmaker - If Meat Ban On Jain Festival "Prayusha", change.org, Meat Ban, petition, Then Why Not Vegetable Ban On Eid, vetegable ban