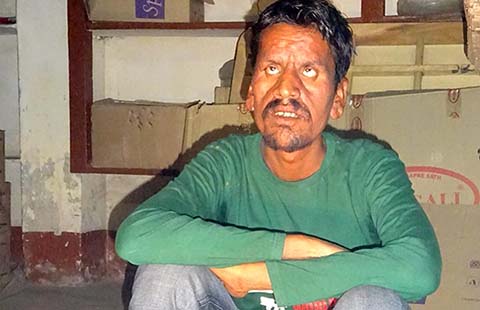 PK- The Film turned out to be one of the most hit film of 2014. It received a great response from audience.
But apart from receiving such a great response, the film even helped to change a life of beggar. A still from the film

Yes, its about Manoj Roy, a real life beggar whose acting as a blind beggar in the film has just changed his life.
Manoj,31 belongs to a very poor family. He lost his mother soon after birth and was forced to beg when his daily -wager father fell too sick to work.

Manoj had very sad story to tell. He left his home twenty years ago in hope of getting job at Delhi. But he was ultimately force to beg. He says —

“I was a regular at Jantar Mantar. A few months ago, two gentlemen approached me and asked if I could act. I told them acting is what I do to ensure two square meals. They gave me a phone number and a Rs. 20 note before leaving.

I went the very next day and found myself among members of a film unit. I was taken aside for an audition with seven other beggars, all visually impaired. I cared little about the film or the actors; it was the free food that mattered, for a week till my selection.

His dedication towards his work even gave him a chance to be in a five-star hotel in Delhi.

I used to often go without bath in the slums because of scarcity of water. There I was, cooling off in the hotel’s swimming pool, and rubbing shoulders with the likes of Aamir Khan and Anushka Sharma.

This film completely change his life. This is what he said about his life after acting in the film —

I returned to my village with the money earned from the film. I have a job in a village shop, a Facebook account and a girlfriend too. People now call me PK Honey Singh. This is all because of the film.