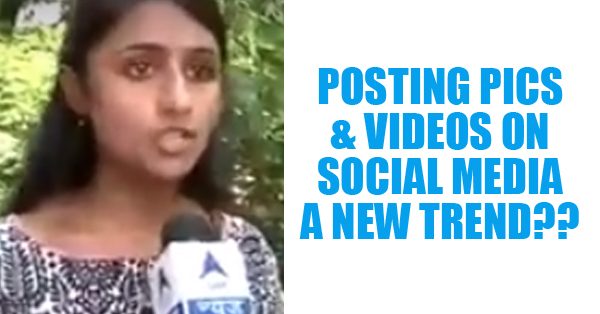 Jasleen & Sarvjeet!! These two common people from Delhi are quite famous now across India, all thanks to Social Media.
Recently a Girl from Delhi, Jasleen Kaur had posted a photo of a guy on her Facebook profile and stated that the guy had molested her and when she warned him of taking his photo and posting it on Facebook, he laughed at it and posed for the photo too. This post of the girl went on to be so viral that it was shared over 1.2lakh times. The girl even lodged an FIR with the Police. At first things looked very simple where the guy was blammed and sacked by a million people on social media for publicly molesting Jasleen. But things weren’t as simple as it looked. After the photo went viral, Delhi police had to come forward and arrest the guy, Sarvjeet.
Then came the first twist that the boy did nothing and the Girl was actually representing a political party for the University Elections and thus she played all this just to get that media attention which she really got. Media in India went on to call the Guy a criminal even before the investigation began. Then slowly all the secrets were unfolded and in the end it was alleged that the Girl was wrong and guy did nothing and was unnecessarily dragged so that the Girl gets the media coverage. So much of confusion over a small photograph.
Here we bought you a video which clearly explains us all the events from first till the end that took place in this case and puts some light on the new trend where Indian girls indulge themselves in posting fake posts and videos and Shaming men at the cost of getting famous. Check this video by mensutra.

The case is still under investigations and we hope that the guilty be it the Guy or the Girl gets punished as soon as possible for misleading the media and people and playing with the law and order of the country.

When There Are So Many Evils In The World, This Man Comes With A Great Initiative
This Video Of Twin Baby Girls Making A Fool Of Their Mom Is Going Super Viral