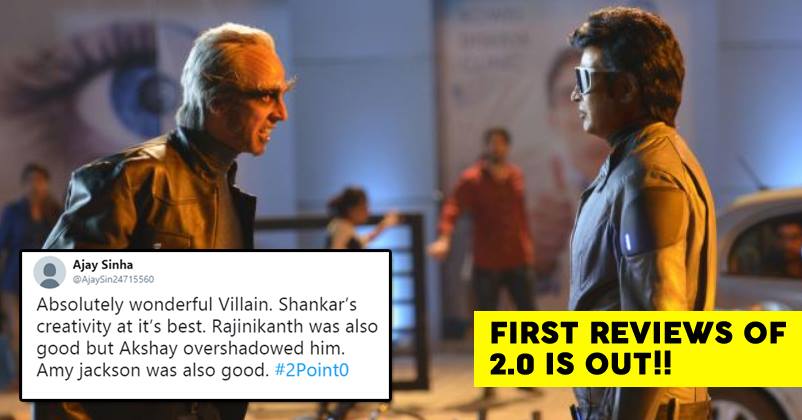 Shankar’s sci-fi film 2.0 starring Superstar Rajinikanth and Akshay Kumar is finally releasing on 29th November and there’s a huge excitement among the audience. The film has been in making for a long time and has made the people wait way too much.

Now that it’s just 4 days away from the release, the fans are going crazy.

2.0 has been made on a budget of 550 crores approx which is highest ever for an Indian film. The release size of the film is also going to be the biggest ever and therefore one can only imagine the kind of opening it’s going to take. The advance reports are huge already and it’s being said that it’s likely to surpass Bahubali.

Before the official release of the film, a few distributors and exhibitors have got a chance to watch 2.0 and they have loved it. The fans of Rajinikanth and Akshay Kumar will love the fact that film has garnered some great pre-release reviews from the industry insiders and that’s a really positive sign.

#2point0 film inside reports are MINDBLOWING . Get ready for BAAP of action commercial film with solid content.

#2Point0 Review!!!!
First On NET!!!!
Watched the first half in the distributors special screening!!!
i challenge you that if it will released as dubbed into english!
it will surely Destroys the world Box office.ultimate content and shankar screenplay is ultimate!!Seatedgethriller

Distributors in Hindi Trade who have seen a glimpse (few scenes) of #2Point0 are raving about the movie.. The movie will be a sure-shot.. Hindi screen-count to go up.. pic.twitter.com/tUrQXTovH1

OMG! #2Point0 what a movie! What a movie guys! Speechless.

Perfectly crafted with top notch background score and acting. This will make you love Akshay Kumar. What a amazing he is. He’s hero of the movie for me. Absolutely stunned by his acting. #2Point0

Hats off to Shankar!! Thank you sir for making this kind of movie that too in India. The only movie for which India will be proud of! From acting to screenplay to visuals to vfx to direction everything was first class. #2Point0

This movie will & should work. Though this movie will be only masala action kind of movie for few people but that’s okay. We’re opening indore advance of the movie from next Thursday! Must watch #2Point0

Now that makes us really excited for the film.

Sakshi Reveals That This Cricketer Is Why She And Dhoni Are Together Today
A Bizzare Challenge Grips Youth. People Are Jumping In Front Of Vehicles And Making Tik Tok Videos