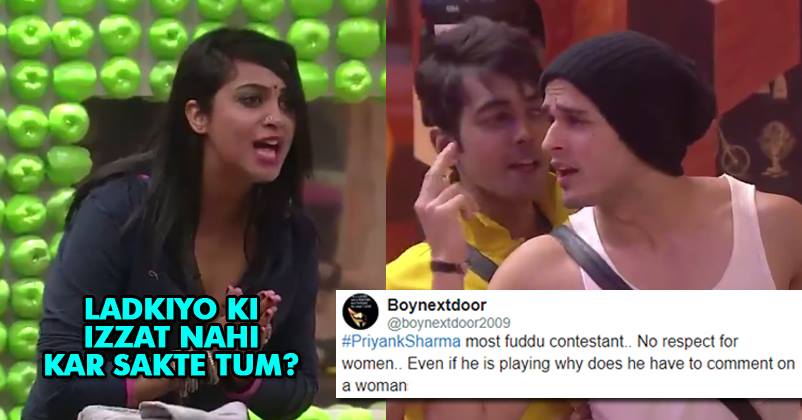 Controversy is the religion of Bigg Boss inmates and they don’t get peace for even a little time if the God of Controversies is not satisfied.

In the tonight’s episode, the Bigg Boss inmates were given a task which brought quite a dirty side of them in public.

The house of Bigg Boss was converted into a courtroom and it was called BB Court where Hiten Tejwani and Arshi Khan fought for their divorce. Hina Khan and Vikas Gupta turned lawyers while Sapna Choudhary and Bandagi Kalra enacted the judges.

As the court proceeding started, Hina Khan was seen accusing Arshi Khan of flirting with every man. She even used very foul language for her. While Vikas Gupta took Arshi’s side, Priyank also attacked her and told that she exercises in the gym in very provocative manner. He went on and on and used some really bad words about her character and the kind of clothes she wears.

Things got really intense and this annoyed Arshi Khan which led to a big fight between Arshi, Priyank and Hina Khan. Arshi was so furious that she even threatened to hit Priyank with shoes.

The #BB11 housemates get their luxury budget task for the week! Witness all the drama, tonight at 10:30 PM. #BBSneakPeek pic.twitter.com/Fj8XrNFsTU

The latest happening has sparked the fire on Twitter and people are hating the way Priyank went below the belt regarding Arshi. Have a look at some of the reactions-

What is this nangi thing ONLY for women? #PriyankSharma roams around shirtless or sleeveless showing off his ugly body which i find disgusting. Men can do whatever they want but a women cant? #Arshi #BB11 #BiggBoss11 #BiggBoss

#PriyankSharma most fuddu contestant.. No respect for women.. Even if he is playing why does he have to comment on a womans others.. Does he cover himself in the house?

Who is #PriyankSharma? Who knows him? An #idiot male version of a stupid and baised person @eyehinakhan . #ArshiKhan has more worth and reputation in house than both (#Hina and #Priyank). Definitely @lostboy54 is genius and mastermind of the house. https://t.co/DrbGwVCNd7