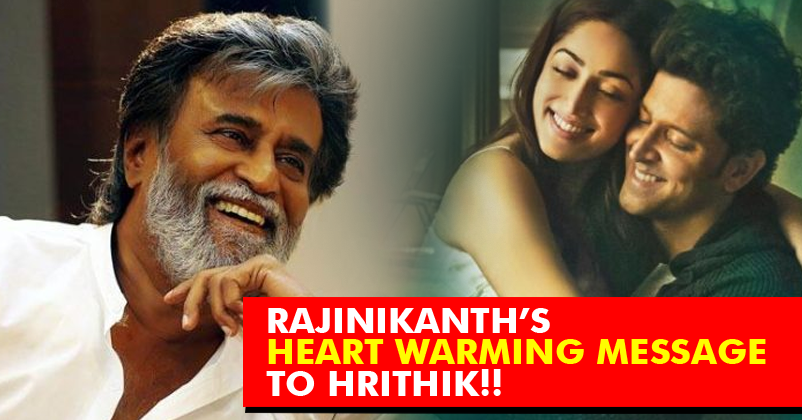 It is said that when legends admire your work, your work indeed qualifies for the finest hall of fame. Rajinikanth needs to introduction and it’s a proven fact that no one in the entire industry can match up to his talent and performance.

We all know that Hrithik Roshan’s new movie ‘KAABIL’ is all set to release on 25th January 2017. The movie consists of actors like Yami Gautam, Ronit Roy and Rohit Roy. Hrithik Roshan recently held a pre-release screening of his movie which got an amazing bunch of reviews. But the review that mattered the most for Hrithik was the one done by Rajinikanth. Yes, you heard that right. Rajinikanth himself wrote a long personal message to Hrithik Roshan where he praised his acting and the efforts put in by him for the perfect execution of his role. Hrithik revealed this in one of the interviews that he gave to a leading media news channel.

This is what he said, ‘Superstar Rajinikanth saw the Kaabil trailer and congratulated me for my efforts. He said that he liked it a lot in his very long message and I have a screenshot of it. To get appreciation from a star like him is very special and close to my heart and I shall savor his words.’ What made the interview more interesting was the unknown fact that none of us knew. Both the actors (Rajinikanth and Hrithik) had earlier acted together in the same movie. Can you guess the movie’s name? Give it a try. Okay, forget it. Read further to know more about it.

Hrithik further added, ‘I was only 12 years old when I first faced the camera and I was beside Rajinikanth then for the film “Bhagwaan Dada”. Getting to act with him at such a young age and in my debut is such an honour for me. Even though we had to go for retakes for my faults back then, he used to tell me it was his fault and took the blame to inspire me for the retake shot. He was like a father, a guide and also a friend to me. He is someone who treats youngsters and elders equally and gives everyone their due respect. When I was a kid, I did not know how big a Superstar he was but now I realize his stature and admire him a lot, It was indeed a very nice gesture from Rajinikanth’s side where he didn’t make the little boy Hrithik feel embarrassed or nervous for his repeated mistakes. Helping out and promoting your juniors is always admired and that is indeed a great sign of professionalism and good human nature. What do you think about Hrithik Roshan’s views on Rajinikanth? Isn’t that just beautiful? Please share your opinion in the comment section below.