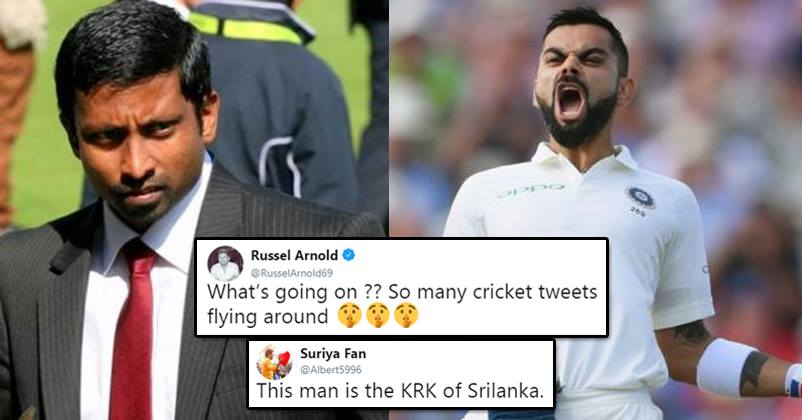 The Test series between India and England is on and our players are doing the best. Kohli hit his 1st 100 yesterday and set Twitter on fire. After his knock, everyone labeled him as “King Kohli”. It was a treat to watch him hit those fiery shots. After Shami’s dismissal, things had turned worse. This is when Virat Kohli came to the rescue and hit a magnificent century.

Amidst this, Russel Arnold tweeted something that didn’t go down well with Indians. He posted 2 tweets and they invited trolls and anger.

While everyone was busy praising Kohli, Arnold was unaware as to what was going on. This is what he tweeted;

What’s going on ?? So many cricket tweets flying around 🤫🤫🤫

And as soon as he tweeted this, Indians made him realize what he was missing out on;

King Kohli conquered Edgbaston, conquered Anderson, and answered his critics with a blistering 149

This man is the KRK of Srilanka.

Yes you piece of shit. It involves two top teams hence you wudnt know about it.

He will have to think twice before tweeting next time.

Continue Reading
You may also like...
Related Topics:Kohli, Russel Arnold

Virat Kohli Made Fun Of Joe Root’s Mic Drop Celebration. This Is How Joe Reacted To It
Hasin Jahan Hit Back At Shami & Leaked Documents To Prove That He’s A Fraudster