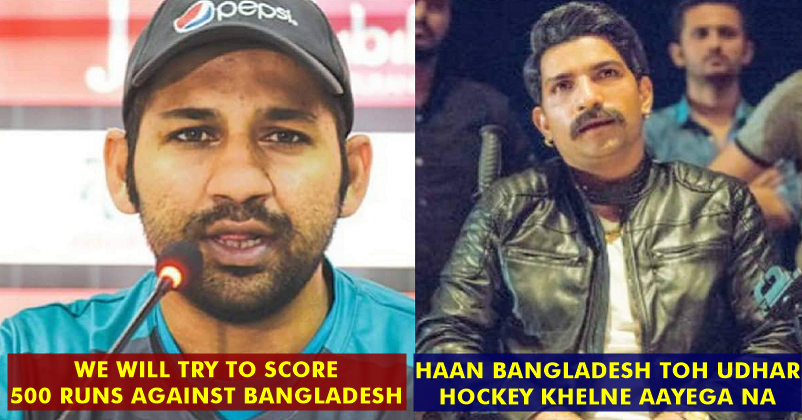 Australia, India, and England have already qualified for Semi-finals. Pakistan is almost out of the tournament and New Zealand is most likely to be the 4th team to qualify for Semifinals.

However, there is a slight chance that Pakistan can make it for the Semi-finals if they beat Bangladesh by a very big margin. Here are calculations for our readers:-

a) If Pakistan bats second then they will be out of the world cup because they will have to chase the target in MINUS -7 overs which is technically not possible.

Now Sarfaraz when told about these calculations than he actually said that Pakistan team would try to score more than 500 runs. It is surely commendable on his part that they have not still considered their world cup campaign over and they are showing intent to win the match with a very big margin. It shows a positive approach of the Pakistan cricket team & Sarfaraz Khan.

Have a look at the video:-

Sarfaraz Ahmed "we will try to score 500" #PAKvBAN #CWC19 pic.twitter.com/JPN3sQ5DR8

However, this didn’t go well with Twitter users and everyone is trolling Sarfaraz Khan for this statement. Here are some of the trolls:-

Should be a fun match tomorrow. Pak in pursuit of 500 will get bowled out for less than a 100 and Bangladesh will chase it down inside 10 overs.

What do you think of Sarfaraz’s this ‘positive’ attitude?