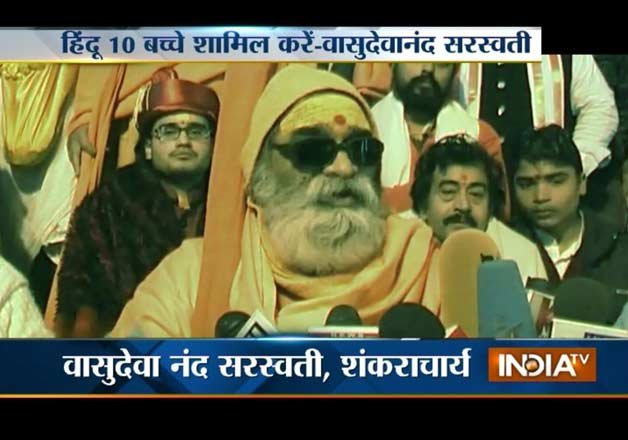 After the controversial statement of BJP lawmaker Sakshi Maharaj saying that all Hindu women must produce four children to protect Hindu religion, it was now the turn of Shankaracharya Vasudevanand Saraswati to take it one step ahead. Shankaracharya Vasudevanand Saraswati of Badrikashram in a coontroversial statement at Magh Mela in Allahabad asked all the Hindu family to give birth to 10 kids.

Narendra Modi has become the Prime Minister because of the unity of Hindus. To maintain their majority, every Hindu family should produce 10 kids.

We should have 10 children. One child each for for Agriculture, IAS, Military, Internal security and social work and give the rest of them to us, we will teach them and will make them Sadhus like us.

Shankaracharya Vasudevanand Saraswati who was recently spotted in Allahabad taking a dip at Sangam also made a comment on Ghar Wapasi issue.

It is from Hindu religion only Christianity, Islam and Sikhs have originated. That’s why everyone must return back to their roots. There should be no ban on Ghar Wapasi so no legal action must be taken against change of religion.

Wait for some time, a law will be passed in Parliament in which anyone indulging in cow slaughter and conversion will be punished with the death sentence.

This is not the first time when any person made such a shameful statement.

The concept of four wives and 40 children will not work in India and the time has come when a Hindu woman must produce at least four children in order to protect Hindu religion.

I have only one request… Every Hindu mother and sister will have to produce at least five children.

So, what are your views about these people asking Hindu’s to produce 4/5/10 children.