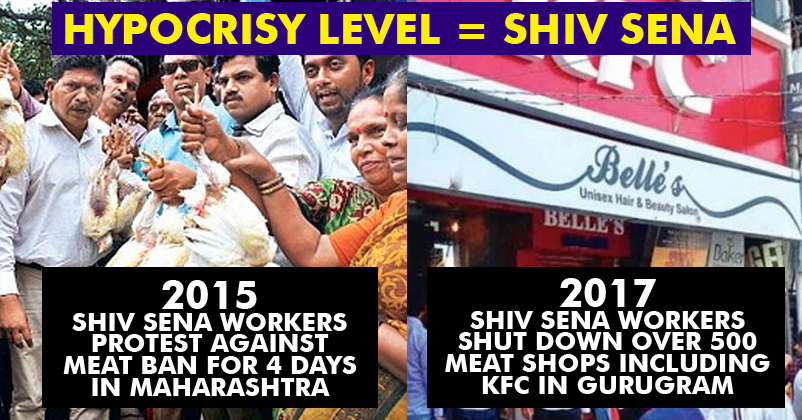 The right to eat is something that we Indians consider as our fundamental right. We have an immense variety of dishes to try out and one amongst them is chicken for sure. But during the Navratri festival, we tend to go a little soft on our diet and hence decide not to eat anything fancy, including chicken. But apparently, we live in a country of 1.2 billion population where a lot of people have different opinions. Hence, it is obvious that not every single person wants to opt out from eating delicious chicken dishes even during the Navratri festival. But sadly it’s the Shiv Sena people who don’t feel like that. Soon after the BJP government in Uttar Pradesh cracked down on the illegal slaughterhouses, Shiv Sena went further ahead in Haryana where they have now shut down more than 500 meat shops. The reason for their actions is believed to be due to the Navratri festival. The effect of their terror has even affected the American fast food restaurant chain KFC. These shops have been given the notice to remain shut not only during the nine days of Navtrata festival but also on all the Tuesdays for the rest of the year. “We have served notices to hotels, dhabas, eateries serving non-vegetarian food, apart from raw meat and chicken shops owners to keep shops shut during Navratri and on Tuesdays. One will have to face consequence in case he does not follow instructions,” said Ritu Raj, general secretary of Shiv Sena in Gurugram said.

However, according to the party members, the move of shutting down the shops was done through a peaceful procedure without any violence. But when the shop owners were contacted regarding the whole issue, they said that they had no choice but to comply with it.

However, if one goes by the amount of love that Shiv Sena people have for chickens, he or she will be surprised. Although they have shut the shops on the occasion of Navratri festival, but it was not long ago when they literally craved for every single bite of it. On 27th August 2016, the BMC announced that as per directives of the government and according to a GR issued by the urban development department in 2004, the meat shops in Mumbai would be shut only for two days i.e. on August 29 and September 5 due to Paryushan (holy period for the Jain community). Surprisingly, it was the Shiv Sena people along with some of the members from the MNS who took the offense and started protesting against it. The way they protested against it was one of its own kind. Have a look at it. They literally started roasting chicken in front of the Jain community hall in the form of protest. Now we wonder what if someone even dares to do such a thing at this point of time in Gurgaon. Will he be spared ? It’s a high time for us to address the shallow hypocrisy of such organizations where it is all okay for them to ban meat when it comes to celebrate their own festival but not when someone else asks for the same special treatment.

We, RVCJ team feel that the shutting down of meat shops during the Navratri festival shouldn’t have happened. It’s an owner’s complete right to sell whatever he wants, wherever he wants and whenever he wants, provided he is selling legal products. Some people don’t eat chicken during Navratri festival which is all okay, but forcing someone else not to eat it just because it is Navratri or Paryushan for that matter is completely wrong.

So what are your opinions on this issue? Please share your views in the comment section below.