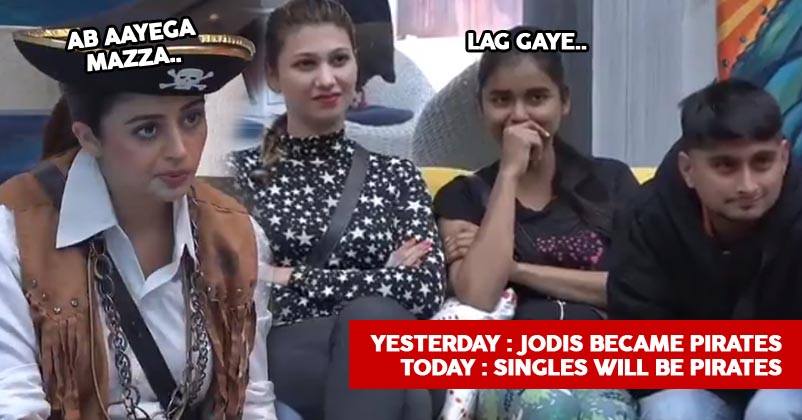 After cruel and merciless torture imposed by Jodis’ team, how can we assume that Singles’ are going to spare them? The tables of turn are now in the court of Singles’ team.

In the Twitter sneak-peak, Jodis are seen kind of pretty much enraged on the performance of Singles. The members sitting on throne happen to be Shivashish, Somi, Jasleen, and one other unrevealed gharwaala.

Now, all we have to figure out is the Jodis’ patience level and in the sneak-peak, they’re not anywhere close to the calmness that Singles showed while sitting and being tortured on the throne.

Moreover, as Partners’ team is so much into cheating and bluffing for the sake of winning, they are also seen hiding the products from the house like shampoo, deodorants and many more such items.

What happened, Partners? Haven’t your members Somi and Saba told you any of their “strong” strategies to win, this time?

Check out an idea of what, today, it is all going to be like

But on the same time, singles are seen NOWHERE to be sparing any of the member sitting on the throne. They’re literally on a roll and doing all that they could imagine and in between their conversations, they have also decided to keep all the mercy aback while performing the task.

Check out the sneak-peak of today’s task here

It's time for the next stage of 'Samudri Lootere' where the singles are all set to take things up a notch! Will the jodis win against them? Find out tonight on #BB12 at 9 PM. #BiggBoss12 pic.twitter.com/ngw5KNmYTd

Several comments from Jodis are heard like Romil said, “Let’s see to what extent singles can go?” and Saba being heard saying, “Deepika, you’re the worst woman!” while Deepika was putting something on Somi’s face while she was on the throne.

So dear Saba, if you see clearly, Deepika is actually walking on your words here when you and your sister said, “Anything to win!”

Also, catch Neha’s message to her mom on Voot.

Indian Journo Trolled Pak Team & Said Indians Washed Them. Shoaib Akhtar Gave An Angry Response
Tanushree Accuses Nana Patekar Of Harassing Her 10 Years Ago, Says Everyone Knew But Did Nothing