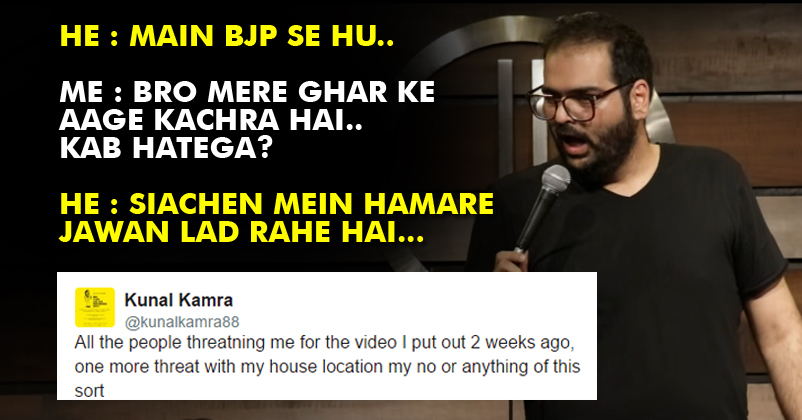 3 years ago, none of us had spoken or discussed on the true meaning of nationalism or patriotism. But now the time has changed. People are actively participating for setting up the right criteria for a person to be called as a nationalist. For some people, it’s a Snapchat video that can cause more harm to the nation while for others, a stand-up comedy video raising such issues is a matter of grave concern. Kunal Kamra, a stand-up comedian, recently came up with his new video where he discussed on how people have now started to fake patriotism and how the word ‘Nationalism’ is now used in order to distract us from the main topic of development. The video was for sure a satirical one. First things first, in order to understand the whole scenario, you need to first watch his stand-up comedy video. So here we go.

Well, I hope you took the content in a sporting manner. Now, after the video went viral, a lot of people started objecting Kunal Kamra’s thoughts. Now objecting someone’s thought is totally fine. In fact, it’s great as it gives us a room for discussions. But what went wrong was the way some of them reacted to this video where they threatened him with dire consequences. Regarding such threats, Kunal Kamra took this incident to Twitter and tweeted.

All the people threatning me for the video I put out 2 weeks ago, one more threat with my house location my no or anything of this sort 1/n

I'll be reporting it to a cyber cell which will take full charge of finding you & penalizing you correctly. Bus bol diya

In a tweet, he addressed the fact that it is not necessary that everyone’s opinions should match and hence he respects other’s point of view.

I understand a difference of opinion & I'm all for it. But our difference don't allow you to threaten me. Atleast not yet they don't

But unlike how things usually go in our country, those who had abused and threatened him realized their mistakes and later apologized. But, there were still a few, who didn’t back out. Kunal Kamra later issued a statement regarding the whole incident after his tweets went viral. Kunal Kamra has right now decided not to mess up with such kind of people to put his mother at ease who is worried about him. But in his tweet, he has given clear hints that he will come back with a much stronger and aggressive content.

Also I thought all I had to say about politics in a funny way was over, but no it's not. I'll speak again with more aggression very soon

Is it a crime to speak up about the issues and things happening in our country? Is it a crime to constructively criticize or joke about our Government, something that was quite common 3 years ago when Manmohan Singh jokes were on a roll.

Continue Reading
You may also like...
Related Topics:kunal kamra, nationalism, stand up video

Pune IT Employee Accepted Friend Request Of A Foreigner Girl & She Duped Him Of Rs 11 Lakhs!
Stray Dogs Helped Police Officers In Arresting A Man Who Murdered His Wife! Here’s How!