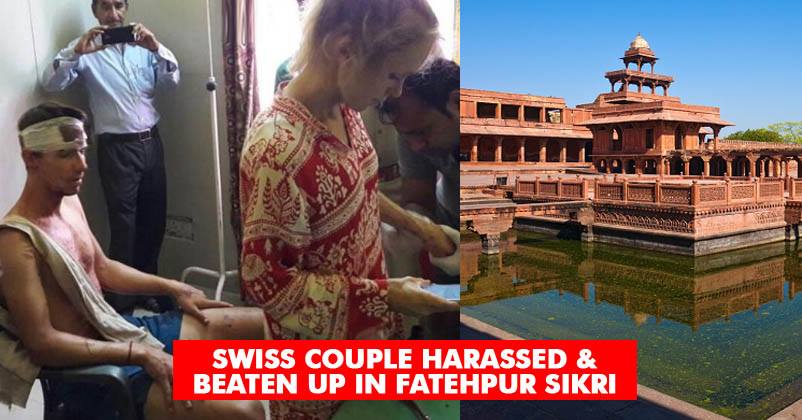 The central government and the state governments are trying to give a boost to the tourism industry but individuals should also understand that their unruly behaviour will not only stop tourists from coming to India but also bring a bad name to the country.

On Sunday, a shocking and disgusting incident took place in Fatehpur Sikri when some youngsters followed, harassed and thrashed a Swiss couple and left them badly injured. Quentin Jeremy Clerc (24) with his girlfriend Marie Droz (24) from Lausanne, Switzerland, came to India on September 30. They were roaming near the railway station after spending a day in Taj city, Agra. Then a group of youngsters started following them.

“They initially passed comments, which we didn’t understand, and then forced us to stop so they could take selfies with Marie.”

“The boys wouldn’t stop walking along despite our protests. All the while they kept taking pictures and trying to get close to Marie. From whatever little we could understand, they were asking our names and the place where we had put up in Agra. They were harassing us. They asked us to accompany them to some place, which we refused. A little after stones and sticks began to rain on me. When Marie intervened, she, too, wasn’t spared.”

They didn’t even spare a woman:

Marie intervened as she thought the boys won’t hit a girl but she was wrong. She told,

“They hurled stones at both of us. I was hit on the back, shoulder and hand. I still cannot understand why they attacked us. They didn’t take any of our valuables.”

The couple is severely injured:

After harassing the swiss couple, the youngsters started beating Quentin and when Marie came in between to rescue him, she was also thrashed badly. Quentin is left with a fractured skull and a clot in brain while Marie has got her left arm fractured with some other injuries. The doctor said that Quentin has been hit near his ear and it may cause problem in hearing. 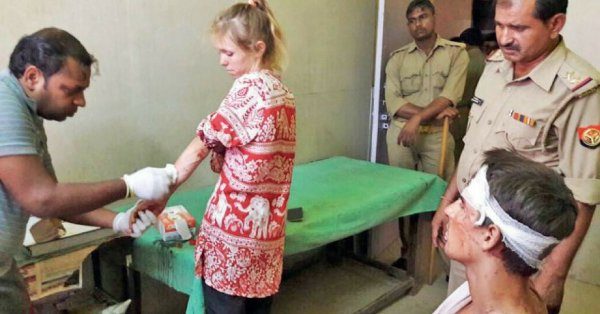 Marie denied the rumours that they both were kissing in the public, as a cop indicated.

The matter has been noticed by the External Affairs Minister of India, Sushma Swaraj, and she has asked the UP government to send a report to her over the issue.

She tweeted, “I have just seen this. I have asked for a report from the State Government.”

I have just seen this. I have asked for a report from the State Government. / 1 https://t.co/NbJk4BF5iS via @TOICitiesNews

Her second tweet read, “My officers will reach them in the hospital.”

My officers will reach them in the hospital. /2

#Swiss Couple Attacked in #Agra #FatehpurSikri. Few punk beat the couple badly.No one came to save them,people were busy to shoot video.😬

And they call themselves true Indians:

Sad that the #swiss couple in #Agra got beaten up. Really sad state of the mentality of a few stupid people who claim to be true Indians..

Swiss couple beaten badly in Agra by locals. Wats d use of such tourist spots if we cant protect foreign tourists !! Shameful

India is no more safe for the White people:

Now India is not a safe tourist spot specially for people having white skin specially in BJP ruled states…..

We also want the culprits to get punished as soon as possible because this type of behaviour in a civilized society is completely unwanted.