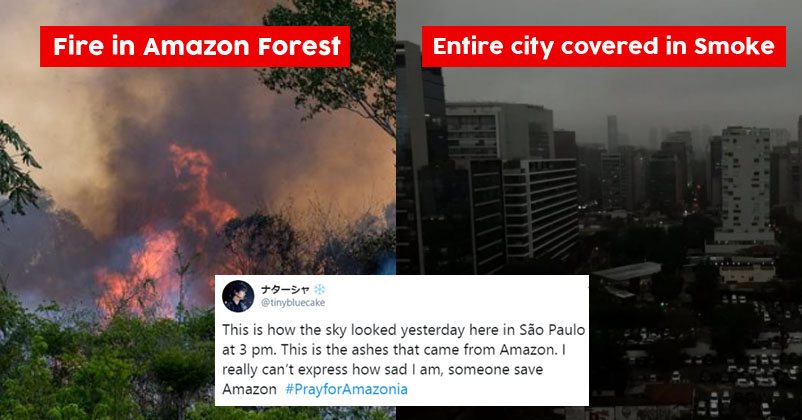 The Amazon Rain forest or the Amazon Jungle is the world’s largest rain forest famed for its biodiversity is on fire for the last 16 days. As per the reports of Brazil’s Research Center about 72,834 fire has been detected in the rain forest from January 2019 to August 2019.

Fires are raging at a record rate, but the world media have decided to keep mum on the current devastating situation of the Amazon and amazingly we can’t hear any outcry. Large parts of the forest which are said to be the lungs of mother earth has turned into ashes.

The smoke from the moist broadleaf forest has reached the big city of Brazil Sao Paulo and has covered the sky with dark clouds. As as per the reports, Sao Paulo is 3000 km away, but it has still managed to affect the city with fog and darkness.

These pictures are the proof that destruction is not far away as the lungs of earth is burning. The unusual smoke affecting the city is the cause of the arrival of cold air, which increased low clouds and fog in the city.

Good morning. Perhaps, you wanna know what the apocalypse is gonna look like? This was São Paulo, yesterday at 3pm #PrayforAmazonia pic.twitter.com/8uvSlZe1mO

Even when Sao Paulo was raining the rain water was all black and people are literally storing the rain falls.

🌎Just a little alert to the world: the sky randomly turned dark today in São Paulo, and meteorologists believe it’s smoke from the fires burning *thousands* of kilometers away, in Rondônia or Paraguay. Imagine how much has to be burning to create that much smoke(!). SOS🌎 pic.twitter.com/P1DrCzQO6x

This is how the sky looked yesterday here in São Paulo at 3 pm. This is the ashes that came from Amazon. I really can’t express how sad I am, someone save Amazon #PrayforAmazonia pic.twitter.com/O7VgZ5rxTi

This is a glass of water filled with rain water in São Paulo, Brazil.
This was taken today. #PrayForTheAmazon pic.twitter.com/XlhxGMSJNH

Praying that this is truuuuue 🙏🏼🙏🏼
MIRACLE RAIN IN AMAZON 😭

The Amazon Rainforest, often called the Earth's lungs, produces more than 20% of the world’s oxygen and its been burning for the past 3 weeks. It’s really heartbreaking. 💔 #PrayForTheAmazon 📸 CTTO pic.twitter.com/4viv7gjgwh

#PrayForTheAmazon
The lungs of our planet is burning🔥
Please 🙏 save our Amazon 🌱 pic.twitter.com/TLR6ewdhFh

The Amazon rainforest has been on fire for weeks, and the blaze is so huge that its smoke can be seen from space.Give this the attention it deserves. Spread awareness #PrayForTheAmazon pic.twitter.com/OZbD4UGi1Z pic.twitter.com/3VBUfH0uQd

Amazon Forest which provide almost 20% Oxygen is burning but no one cares. #PrayForTheAmazon pic.twitter.com/MBjYbs0Zur

It’s high time we should think about our nature.

Continue Reading
You may also like...
Related Topics:amazon rain forest