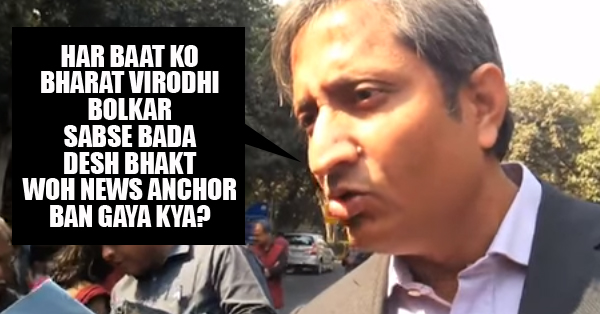 On Tuesday, a protest march was held by journalists against beating up of media personnel at Patiala House Court Premises on Monday by a group of lawyers. During the entire event, the police didn’t take any action. The star anchor of NDTV India, Ravish Kumar spoke to Editor-In-Chief of Newslaundry, Madhu Trehan and expressed disappointment over the way JNU crackdown was being covered by various sections of media. Without naming them, Ravish lashed out at few anchors who were polarizing the audience.
He states that anchors are no one for labeling anyone as anti-Indian. He further adds that anchors usually highlight frivolous issues and ignore those that affect common man. He expressed disappointment by stating that anchors hardly visit places where people are in bad condition and are dying of hunger and thirst.
Have a look at the video below:

Continue Reading
You may also like...
Related Topics:ravish Kumar, This Is How Ravish Kumar Lashed Out At Arnab Goswami Along With Other Anchors On JNU Crackdown