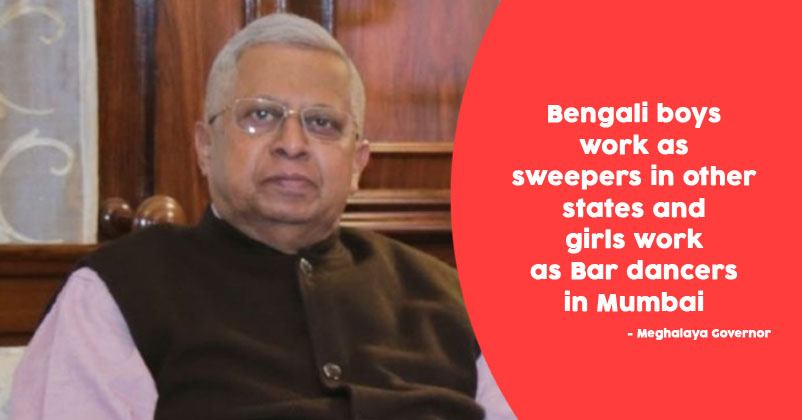 Meghalaya governor Tathagata Roy recently gave a very controversial statement about boys and girls of Bengal. He said that Bengali boys are working as sweepers and the girls as bar dancers in other states.

Now Trinamool Congress’ Banga Janani Vahini has stepped out in protest against Roy’s comment. Roy posted a series of tweet claiming that many boys from Bengal are sweeping floors in other states while girls are working as bar dancers in Mumbai.

The women blew conch shells to call out for women power and held up placards attacking Roy. Sashi Panja said that not respecting women is the fundamental flaw of BJP and they try to divide people.

Chandrima Banerjee stated that every Indian citizen is allowed to chose his profession and those who are making sarcastic comments about it do not even have the least education.

Roy commented arguing that learning Hindi was mandatory for everyone.

“… There is no great opposition. They only make noise for political reasons. Assam, Maharashtra, Odisha are also non-Hindi speaking states but they don’t oppose Hindi. The 2nd argument is Bengal is the land of Vidyasagar, Vivekananda, Rabindranath, and Netaji so why should Bengalis learn Hindi,” he tweeted.

“What is the link between these great men and opposition to learning Hindi? Secondly, who will explain to them that the era of these stalwarts is long gone, and the greatness of Bengal is gone too? Now from Haryana to Kerala, Bengali boys are sweeping the floors in homes and Bengali girls are bar dancers in Mumbai, which was unthinkable before,” he added.

Delhi Government Planning To Make Commuting Free For Women, Twitter Doesn’t Want it
UP Police Slammed By Twitterati After They Arrest A Journalist For Posting About Yogi Adityanath