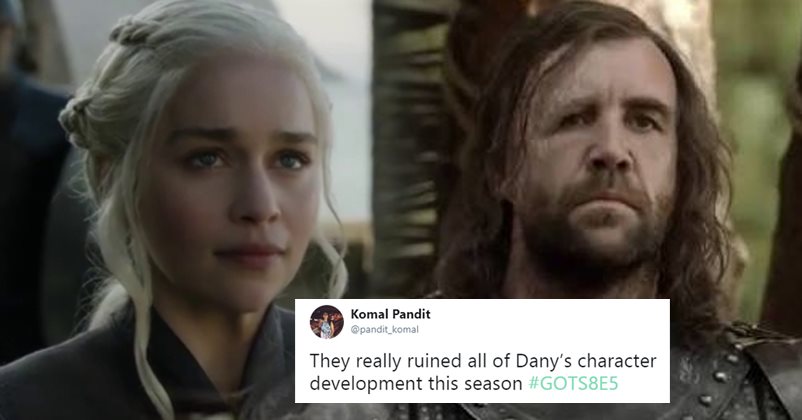 Game of Thrones has a huge fan base in Indian. It does wonders. What Indian mothers can’t do, GoT does it every Monday, that is to wake us up early morning. With the last season out everyone is hooked to this series. The last episode was one the most tedious episode in GoT history and episode 5 was the most cringy episode. Mad Queen, burns down everything in sight and Jon finally realizes what he has got into.

People are disappointed by this behavior of Daenerys Targaryen and no one, literally, no one is happy with the outcome of this episode.

See, how people react to this episode.

Faced his biggest fear: His brother and Fire

Me at the beginning of the episode vs me at the end. #GoT #GOTS8E5 pic.twitter.com/ZmldIxqQrG

Me to Daenerys in the last 40 mins of the episode : #gameofthrones #GOTS8E5 pic.twitter.com/jSuBy09no7

Jon: what did you do to kings landing?
Daenerys: #GOTS8E5 pic.twitter.com/iBkSRxuZqO

At first I thought it was fucked up but when I Saw this it made me feel better 😂😂 #GameofThrones #GOTS8E5 pic.twitter.com/YSSwc9fm8d

What Cersei shoulda been doing while the city burnt #GOT #GOTS8E5 pic.twitter.com/J7QZChMX9n

(FYI #GameofThrones, Arya running through the city obscured by dust IS the kind of hard-to-see visual that works really well.) #GOTS8E5

With death poll rising again, who survives it?