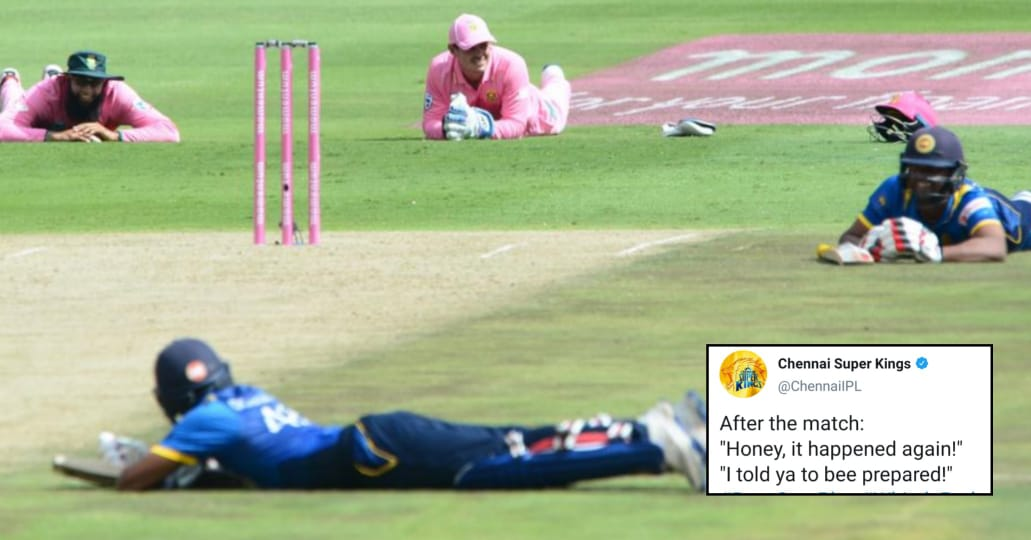 The ongoing ICC world cup has faced several comas and full stops in several matches. Earlier it was rain because of which a match was either canceled or stopped in the middle. But in yesterday’s match between South Africa and Sri Lanka, a swarm of bees entered into the ground and suspended the match for few moments. All the players present on the field along with the umpire, lied flat on the ground to avoid any sting. The bees entered the ground in the 48th over of the first inning.

This is not the first time when bees stopped a cricket match. A similar incident happened in 2017 also, when the game was paused for a few minutes because of these tiny yet dangerous insects.

The official twitter handle of Cricket World Cup shared a photo of the ground on Twitter and joked, “Bees two nations have a history!#SLvSA | #CWC19”.

However, the incident triggered laughter and memes on the internet. Memers are explaining the players’ reaction on the field in their own unique way.

After the match:
"Honey, it happened again!"
"I told ya to bee prepared!"#BeesStopPlay #WhistlePodu #SLvSA #CWC19

When mum enters my room at midnight me and my siblings be like:#SAvSL pic.twitter.com/faWk4y839u

When you're playing cricket during the break and teacher suddenly enters the classroom 🤭🤫😷 #SAvSL #SLvSA #CWC19 pic.twitter.com/f8RA45H4PC

When you spent whole night on PUBG and the office morning be like #SLvSA pic.twitter.com/x9u07qh6oa

God released a trailer for 2020 in #SLvSA

Me: I'll be productful from Monday

#SLvSA Bees on the field. Queen- "If there is no seat available for us then we'll watch this match from ground" 😁

Oh well, the game did need a little buzz 😎

Reports are coming that bees have finally found Imran Tahir at Chester-le-Street Stadium in #SLvSA #CWC19 match. Do remember Imran Tahir ran over a beehive during his sprint. pic.twitter.com/GfqvKtO7nB

Indian Cricketer KL Rahul Is In Love With This Bollywood Actress
Kohli Reacts To The Jersey Change, Says Blue Has Always Been Our Color