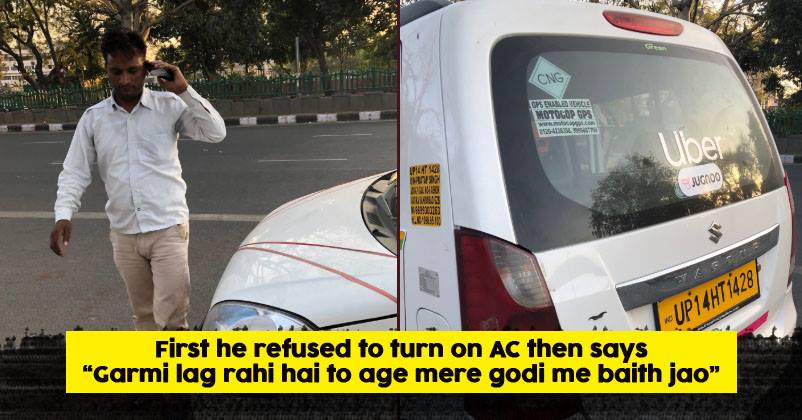 Recently, another shocking incident came up in our national capital. A woman who identified herself as Amrita Das, a journalist based in Delhi, took to Twitter, to share her unpleasant experience with an Uber driver.

Previously also, we have come across such incidents, where women passengers accused cab drivers of misbehavior or passing vulgar comments. Amrita Das took to Twitter, and shared her disgusting experience, where an Uber driver told her to come and sit on his lap, because she told him to turn on the air conditioner.

@Uber_Delhi @Uber @Uber_Support rude and creepy driver. I demand action. First he refused to turn on ac then says garmi lag rahi hai to age mere godi me baith jao. He also ended trip moments after starting to drive and forced me out. This is when I was with husband. @DelhiPolice pic.twitter.com/qE40ib3B5d

When this news spread over like wildfire, Uber replied to her Tweet and requested her to check mails to provide them with further detailed information. They also stated that the accused driver has been sacked already.

We're so sorry to hear about this. Our team has recently responded via email. Please reply there if you have additional questions!

Even a Twitter user demanded that Uber should enlighten them with the actions they will be taking, so that rest of us are assured.

Hey @Uber_Support, why via email-do stay on this Platform, are you trying to sweep this under the carpet..please be BOLD & TRANSPARENT…take action that we can all see & Share..you have engaged GOONDAS as Drivers ! SHAME:SHAME ! @IndianExpress ,@TimesNow ,@ndtv, @akashbanerjee

People on the social media, became outrageous after reading this incident. They became more concerned how unsafe our place of mere existence is becoming. Some even tagged Delhi Police and demanded strict actions.

@Uber_Support Taking this particular driver as reference, I'd like to know how do you ensure something like this does not happen again? Is he going to be let off with a warning? Or sacked? Or sensitised? What are the concrete steps you're taking to make your riders feel safe?

This is serious. No response from @DelhiPolice @DelhiTrafficPol ?
Don't hesitate in filing a police complaint. @Uber_Support Do you not verify drivers' credentials before hiring? @Uppolice and @uptrafficpolice also need to look into the matter, since the car has no. plate of UP

Uber don't provide customer care number to contact quckly and compaint about concern.
They always say message.
Uber is not safe for girls. Uber should accept it and improve the service otherwise people bycott you#bycottuber

Uber has gone worst in NCR. If u’d ask to turn on AC, they’ll lecture you on whether.

Cab drivers in their ‘prime category’ are even worst.

Very embarrassing …….@DelhiPolice should investigate this.

Sick and tired of @Uber_Delhi drivers. No action taken even after having multiple harrowing experiences. Sack this driver!

Ridiculous and shocking. This is what the women are facing everyday in Delhi.

Delhi Police should investigate this case. If the driver is guilty, please take necessary actions. If he’s clean, take action against the complaint.

Case must be investigated thoroughly and if prove than culprit must be finished to avoid such scenario in future.

How can they operate in Delhi without HSRP? @dtptraffic the numberplate appears to be fake with tape peeling off. The cops & aggregators have to ban engine & chassis number as well. Else they will come on other platform like @Olacabs or @Jugnoo_Care

When citizens tagged Delhi Police, to draw their attention to this particular incident, which violates women’s safety code and again reinstates the fact that how women of our country is constantly under threat just because they are them. Delhi Police replied.

Mam, kindly mention the date,time and place of occurrence of the said incident as per your complaint on your twitter handle yesterday for further necessary action on the same.

You can share your own ordeal with us, so that people can get more careful in situations like this.

Continue Reading
You may also like...
Related Topics:Amrita Das, Uber

Girl Stands On A Cliff And Poses With Her Arms Wide Open. A Huge Wave Comes And Takes Her Away
India Drops 7 Places In UN’s Happiness Index. But Why Are Indians So Unhappy?