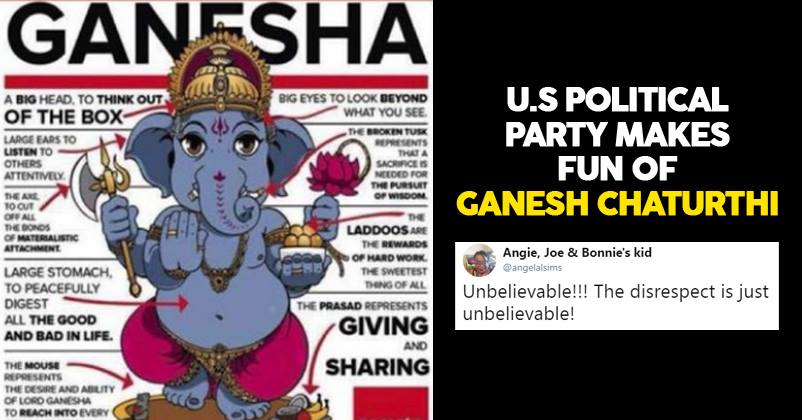 Once again it has been proved that religion and politics should not be mixed together and this time it is the US Republican party that is at the receiving end of Hindu community of US.

An advertisement was published in a newspaper featuring the image of Lord Ganesha on the occasion of Ganesh Chaturthi with a question, “Would you worship a donkey or an elephant? The choice is yours.”

In the photo, Lord Ganesha’s qualities have been described as below:

“A big head to think out of the box, big eyes to look beyond what you see, large ears to listen to others attentively, the axe to cut off all the bonds of materialistic attachment and large stomach to peacefully digest all the good and bad in life. The broken tusk represents that a sacrifice is needed for the pursuit of wisdom. The laddoos are the rewards of hard work. The sweetest thing of all! The prasad represents giving and sharing. The mouse represents the desire and ability of Lord Ganesha to reach into every nook and cranny of the mind.” 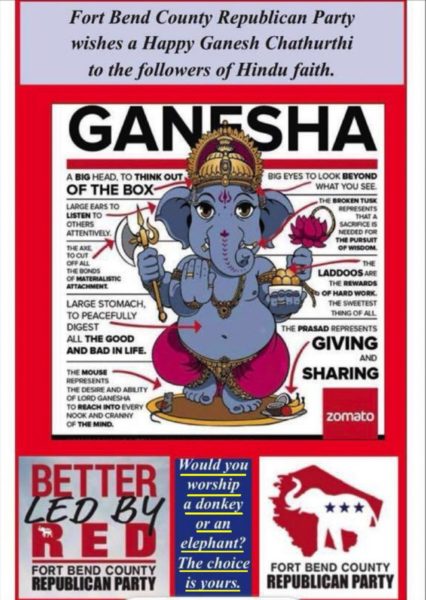 The Ford Bend County unit of the Republican party that published the ad apologized after receiving backlash from the Hindu community. The Hindu-American Foundation (HAF) of Houston called the county unit and asked them to apologize for hurting Hindu sentiments. HAF stated that it appreciates the attempt made by the Ford Bend County unit to reach to Hindus but comparing their feelings for Lord Ganesha with the decision to choose a party based on its animal is offensive.

Sri Preston Kulkarni, one of the Democrat leaders, took to Twitter to slam the Republican party and said that comparing a religious figure with a political party is highly inappropriate.

“Asking Hindu-Americans if they would rather vote for a donkey or an elephant by comparing Ganesha, a religious figure, to a political party is highly inappropriate.

The Fort Bend County Republican party must retract this ad.”

Asking Hindu-Americans if they would rather vote for a donkey or an elephant by comparing Ganesha, a religious figure, to a political party is highly inappropriate.

Twitter also flooded with reactions and this is how angry users reacted:

I'm not Hindu but find this very offensive. Thanks for pointing it out.

So,during Ganesh Chaturthi, the GOP-Gandus have though it might be a good idea to insult Hindus with this ad?🙄

It makes clear that they have 0 respect for anything, they're lacking any conscience & void of any sense of decency! #GanpattiBappaMorya🌺

This is so offensive to the Hindu community, and to all ppl, for that matter. Using a religious symbol to coerce ppl to make a political choice is just plain low and disgusting.

This is in poor taste and terrible design.

That ad is appalling. Thank you for raising consciousness about it.

If I was a member of the Hindu community, I would not vote for a bunch of lying, thieving, criminals simply because they are claiming to have the "better animal" as their representation. In fact, I'd be outraged that they dared to compare Republicans with benevolent Ganesh.

On the other hand, the Ford Bend County unit of the Republican party apologized to the Hindu community by issuing an official statement, signed by their chairman Jacey Jetton, the first Korean-American to lead the party.

Here is the official apology:

“The ad was meant to be part of the celebration and acknowledge the occasion. The ad was not meant to disparage Hindu customs or traditions in any way. As the party’s first Korean-American Chairman, I have seen successful party outreach and understand the complexities of those efforts. This ad was created with input from those of Hindu faith so that we could properly pay respect to the sacred festival. This highlights the difficulty in outreach that can be positive for one group but not for another in the same community. We offer our sincerest apologies to anyone that was offended by the ad. Obviously, that was not the intent.

It is our goal to build understanding and relationships with all of the different communities in Fort Bend County so that we can best convey our ideas and values. We welcome all those who are willing to be part of that process.

What is your opinion about the ad? Let us know.

Online Game Fortnite Causes 200 Divorces In The UK. Will PUBG Do This In India?
IKEA Hyderabad In Trouble, Customer Finds Insect In Chocolate Cake & Posted Video On Twitter