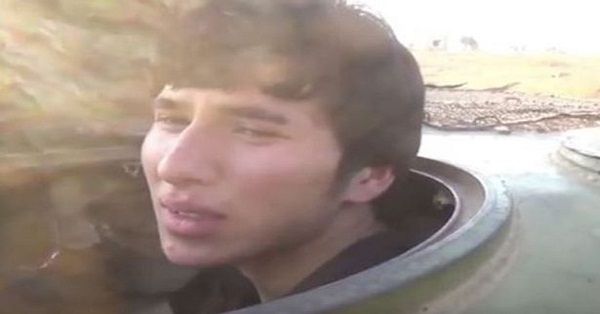 A man in early twenties from Uzbekistan, named as an Jafar al-Tayyar joined militants in Syria, and then was asked to blow himself up for a suicide attack mission. This jihadist suicide bomber was filmed by his fellow militants when he broke down in tears just before going for the mission.

The militant was frightened before going for the attack and can be seen being comforted by his fellow militants. He was given the responsibility to blow up the Shiite town of Fua in Idlib Province.

Just before going for the attack the militant can be seen hopping the explosives-packed personal vehicle when he starts crying and then his fellow militant says “Jafar, my brother, don’t be afraid. When you are scared, remember Allah”.

Here is the short version of the video where you can see the militant and his fellow militants comforting him before going for the attack.


You can watch the Video directly on YouTube by clicking on this link.

Here is the FULL Video where the militant can be seen blowing himself up along with many other people in the city. However, it is still not known how many people got killed in this fatal attack.

You can Watch the above Video directly on YouTube by clicking on this link.

This video shows how coward these militant groups are where they brainwash young people from various parts of the world and make them waste their life in a snap, all just in the name of JIHAD.

What are your thoughts on this gruesome video. Let us know in the comments section below.
Featured Image Source