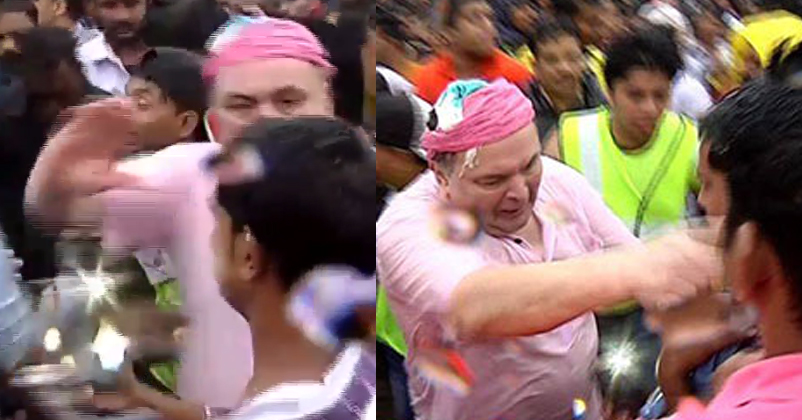 We certainly don’t know a thing or so that it takes to be a celebrity which indeed gives us the right to judge anyone just on the basis of his spinal actions. Time and again there has been this new war that has been going on between Bollywood & Media Journalists where one side is for sure crossing the line to interfere into someone’s business. One calls this as their job while the other one calls it to be none of their business.

Rishi Kapoor has lately been into this new controversy where he engaged in some fist fights along with some pushing with the mob. Now this so called MOB consisted of literate people like Journalists who were too curious and excited to get the perfect picture of Rishi Kapoor on the occasion of Ganesh Chathurthi. Here is the video, Have a look.

Well, media reported this incident as ‘SHOCKING’ which is true in way but aren’t showing you the real reason behind it. How would you feel like surrounded by hundreds of people trying to push you for taking interviews in the midst of a rain ? A normal person does feel irritated and frustrated. There is always a time and place for giving interviews and expressing your views about certain things. It was raining and they were out in public among 100s of people which made it impossible for them to even speak or react. How could the media people expected them to ‘SAY_A_FEW_WORDS’. At such situation, frustration is the first thing that comes inside you. However, we would also like to add that no one has the right and the power to raise hands on media journalists or for that matter on anyone in public. At the same time we can’t rule out the fact that these so called media journalists do break the line and always irritate the shit out of celebrities.

There has been many cases where these celebrities have opened up against such actions. Salman Khan and Jaya Bachchan are the recent ones to make remarks on such an issue. “I hate it because the bulbs flash right in my eyes. These are basic manners which Indians have to learn. Just because you have a camera and a mobile, you have the freedom of taking anyone’s picture any time, without asking for permission! This is basic education that all colleges, schools and parents at home should teach their children.”, she said in an interview where some photographers were distracting her.

Was it justified to beat the journalists just because ‘you’ were getting way too angry or was it a necessary thing to teach them a lesson or two ?

5 Reasons Why Virat Kohli Is Better Than Sachin Tendulkar
OMG! World’s Only Bollywood Theme Park To Open In Dubai This October!