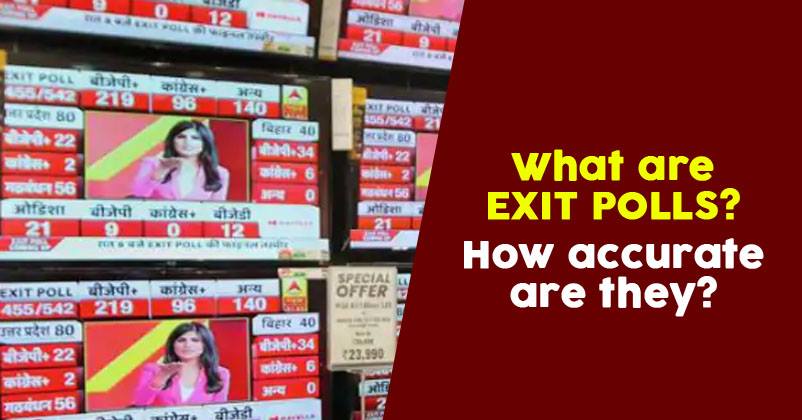 Now that all seven phases of elections on total 542 seats are over, the nation is busy watching exit polls given by different polling agencies on various news channels. But no one has the slightest idea, which exit poll to believe as everyone is coming up with their own data and figures.
Keeping an eye on all the predictions, lets have a look at some questions related to the exit polls.

What are exit polls?

Exit polls are the predictions made after a thorough survey carried out by different polling agencies, about the final result of any elections. Exit polls just give the slight idea of the result and it is not always 100% reliable.

How are exit polls conducted?

Exit polls or post voting polls are conducted right after a voter casts his vote. The aim of the exit poll it to predict the actual results, before it arrives. The predictions are made on the basis of information collected from voters. A large sample is taken in a particular area and they are interviewed using a structured questionnaire.

How accurate are these exit polls?

Exit polls are never accurate, they just give the unclear picture which is most of the time very similar to the actual result. But there has been instances when exit polls have totally gone wrong.

* Section 126A of the Representation of the People’s Act, 1951 does not allow agencies to show exit polls from the period between the starting of the elections until half an hour after the closing of the final phase of the poll.

* Exit polls began in 1957 during the second Lok Sabha elections.

* Sample size of exit polls for 2019 is about several lakhs.

This Gurudwara In Dubai Is Setting Example Of Peace And Harmony
These People Went Way Out Of The Way To Vote, Their Stories Will Make You Proud