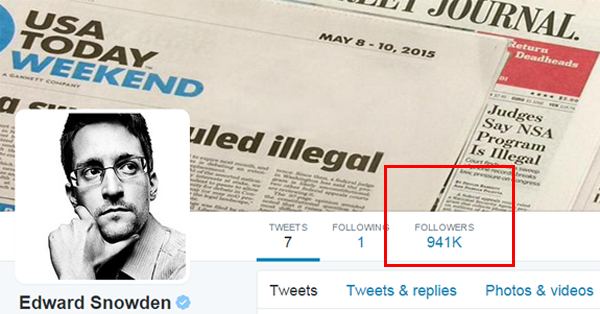 Yes, He is indeed the Worlds Most Wanted Man. EDWARD SNOWDEN who once worked for the American Secret Agency was accused of leaking vital and confidential information relating to America’s Surveillance Programs joined twitter and within a Day he joined this social media platform he has got about 1 Million Followers and counting. His entry on to the Social Media would have definitely shook some of the Seats really hard. 😉
He joined with a very simple User Name/ Handle @ Snowden.
This very first tweet of Edward had gone all over the Social Media and was re-tweeted 96000 times and was Favorited by about 87000 users. The tweet said “CAN YOU HEAR ME NOW?”

Can you hear me now?

The response he got on this very first tweet was so huge that even Twitter’s official ID had to make a tweet about it and tell people about Snowden’s entry on to Twitter Platform.

His about column on twitter states “I USED TO WORK FOR THE GOVERNMENT. NOW I WORK FOR THE PUBLIC” DIRECTOR At @ FreedomOfPress. The thing which is even more interesting to know is that Edward Snowden follows just one twitter handle and that twitter handle is none other than the Official Twitter Handle of NATIONAL SECURITY AGENCY / CENTRAL SECURITY SERVICE.

Edwards Entry on Twitter had made twitter even more exciting. It would be fun to see an interaction of this Geek with NSA or Some other Official Representative of the US Government.